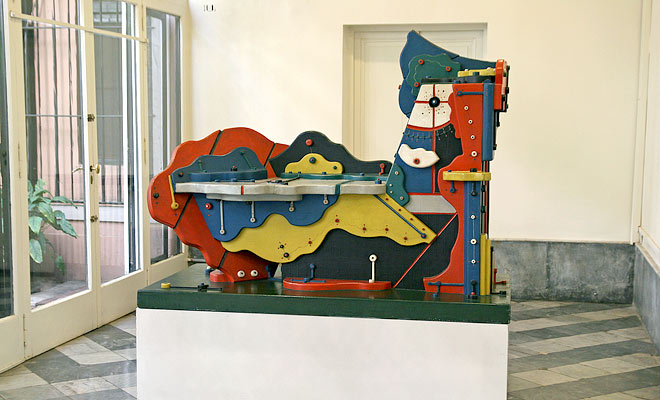 The historical Casona Alsina, in the district Belgrano, is the headquarters of the Fundación BBVA Banco Francés and the Museo Líbero Badií, which houses a large part of the works of one of Argentina's most exceptional artists of the 20th century: Líbero Badií. The collection comprises sculptures from various creative periods of Badií (between 1942 and 1978), as well as paintings, prints, sketches, artist's books and documentary material.

Born in 1916 in Arezzo Italy, Badií arrived in Argentina with his family in 1927, acquiring the citizenship in 1947. He was initiated in sculpture by his father in his marble workshop, then studied at the National School of Decorative Arts and, between 1940-44, at the Superior School of Fine Arts in Buenos Aires. He was Numerary Member of the National Academy of Fine Arts since 1972.

His numerous exhibitions include a retrospective at the Museo Nacional de Bellas Artes in 1962, and, in 1968, the large show at the - in those days very important - Instituto Di Tella in Buenos Aires, as well as participations at the São Paulo Biennial, where he was awarded the International Prize in 1971.

In the work of Líbero Badií, the most remarkable are his large polychromed wood sculptures. His explorations of the sculptural space, the vital power of the primitive, the abstract grasping of the universal, and of the plastic movement, marked his singularity among the socio-cultural codes of his generation. He described his artistic quest as a search of "Lo Siniestro", the enigmatic energy of life, beyond any rational explanation.

(From information of the museum and other sources.
© Translation from Spanish: Haupt & Binder)

Universes in Universe thanks the Art Coordinator of the Fundación BBVA Banco Francés, Carolina di Paola, for the photo permission and cooperation.