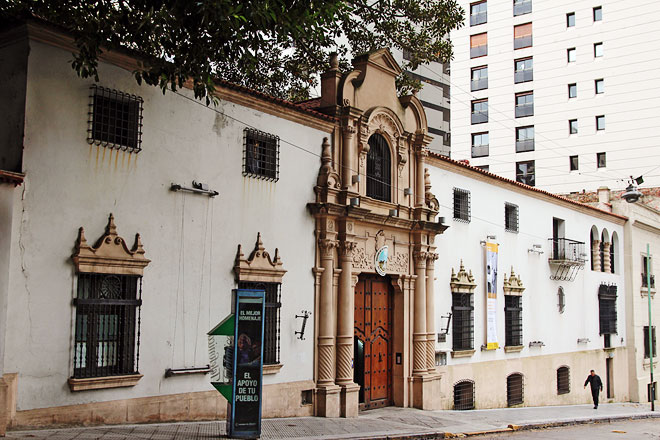 Venue:
Former Palacio Noel in the Retiro quarter, constructed in neocolonial style in the 1920s by the architect Martín Noel as his own residence. Inspired by Baroque elements from Spain (such as its Andalusian gardens) and Peru (such as its observation balconies and façades as altarpieces).

Collection:
Based on the historical collection of Isaac Fernández Blanco. Already in 1921, the collector had opened his house (on Hipólito Irigoyen Str. 1420, close to the Parliament) as a private museum. In 1922 he sold that building to the Municipality of Buenos Aires and donated the whole collection to said government, opening as a municipal museum during that same year. In 1943, a municipal decree determined to join the collections of the Museo Fernández Blanco and the Museo Colonial (collection of Martín Noel), and the Palacio Noel was selected to host them as single venue, due to its architectonic concept and capacity. Throughout the years other collections, endowment s and donations further enriched the collection.

Highlights:
The viceregal silverwork collection is the largest in South America. The colonial painting collection includes an important spectrum of paintings from Cuzco, as well as examples of the School of Potosí, and the Mexican viceregal school. Among the colonial religious images in wood, alabaster and ivory, stand out those from the Guarani Jesuit Missions, and from Peru, Quito, the Bolivian high plateau, from Brazil, Spain, from the Philippines, and, in particular, those from Buenos Aires.

Museum's presentation concept:
The Fourth World, Art and Society in Viceregal America
Emphasizes the historical paradox of the encounters and cultural adaptation between two realities: Europe, assured of its faith, conceived at the pinnacle of the three known worlds (Europe, Asia and Africa), and America, the "new" realm, strikingly complex and transforming. The encounter generated one of the most unusual outcomes in art history: the American Baroque.

(Summary of information from the museum's website.
© Translation from Spanish: Haupt & Binder)