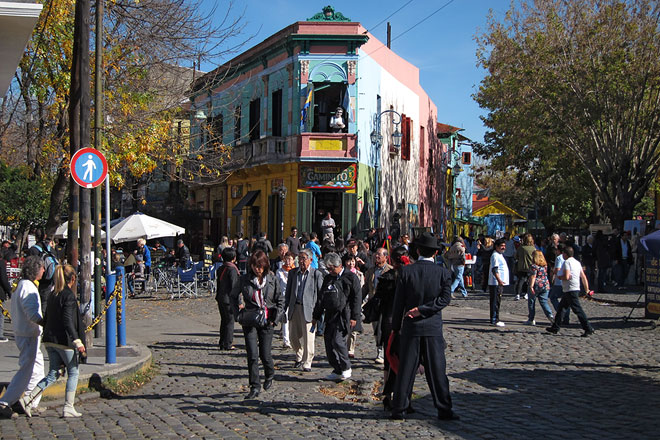 The quarter of La Boca is named after the "mouth" of the Riachuelo (little river), which flows there into the Rio de la Plata. It is believed that in that area was the first foundation of Buenos Aires by Pedro de Mendoza in 1536.

In the second half of the 19th century, numerous Italian immigrants settled there (particularly from Genoa), because of the working possibilities offered by the port. They constructed their houses out of wood planks and corrugated iron on wooden pillars to prevent the regular flooding of the river. They used the remnants of paint from the shipyards to protect and color the walls. The quarter also attracted bohemian, artists and musicians.

The artist Quinquela Martín reinterpreted the local tradition, and encouraged his neighbors to use more vivid colors. Following his initiative and that of other neighbors, in order to recuperate a dirty and desolated passage and convert it into a lively and colorful street, "Caminito" was created in the 1950s. Reliefs, mosaics, sculptures by different artists and of distinct popular taste were added to the building walls. In 1959 the Municipality of Buenos Aires declared it "Museum Street". Today, Caminito is a tourist attraction with souvenirs and handicraft market, as well as street shows and tango dancers.