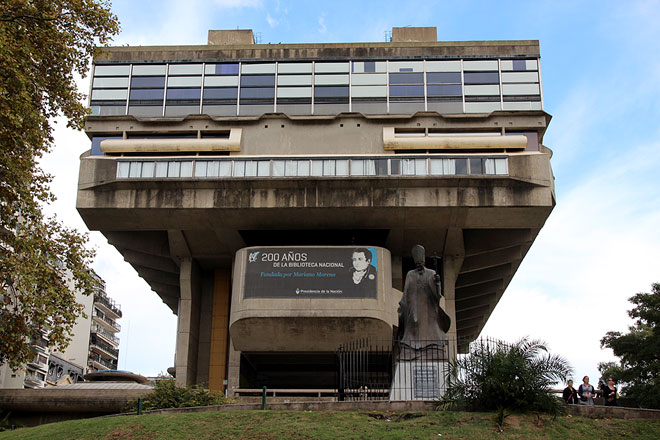 Frist Prize of the National Competition for Preliminary Drafts in 1961.

The construction started in 1972, and, although it could not be finished until 1992, the monumental silhouette of the unfinished building defined the city's shape for a long time.

The National Library is located in a park of about two hectares, which was designed by landscape gardener Carlos Thays for the Quinta Unzué (Residence of the family Unzué), which became later the presidential residence where Eva Perón died in 1952.

Respecting the precondition to leave as much free land as possible, and to reduce to a minimum the cut down of old trees, the architects decided to liberate the main floor, to elevate the reading rooms, and to place the book deposit in two basements. The building corresponds to the architectural style denominated Brutalism, with the main structure resolved in concrete. The resulting monumental volume is visible from different perspectives from the surrounding avenues and parks. The architectural solution of the street accesses and open or half covered areas related to the library, incorporate and define the surrounding public space.

In his book Guía de Arquitectura de Buenos Aires (Buenos Aires - Sevilla 1998), architect Alberto Petrina highlights the double quality of this work by Clorindo Testa: From the distance it appears as a colossal sculpture, and from nearby it conveys all the symbolic emphasis required by its function.

The old National Library was located in the San Telmo quarter. Jorge Luis Borges was director from 1955 to 1973. The construction of the new building started during his administration.

Besides of the main library services, there are several halls such as Sala Leopoldo Marechal, the Fototeca and Sala Juan L. Ortiz, where rotating exhibitions of visual arts take place.

Under the authority of the National Library, and located behind it with entrance via Av. Las Heras 2555, the Museum of Book and Language was opened in September 2011.

Besides of the didactic exhibitions dedicated to the book and the Argentinean language, the museum has a hall for rotating exhibitions on the 2nd floor, also exhibiting contemporary art.

In the building there are four arched window panels in exhibition which belonged to the Galerías Pacífico, before they were reopened as shopping mall in 1992. They are part of the murals realized in 1946 by the artists Lino Enea Spilimbergo, Demetrio Urruchúa, Juan Carlos Castagnino and Manuel Colmeiro. Their restauration is done in front of the public.