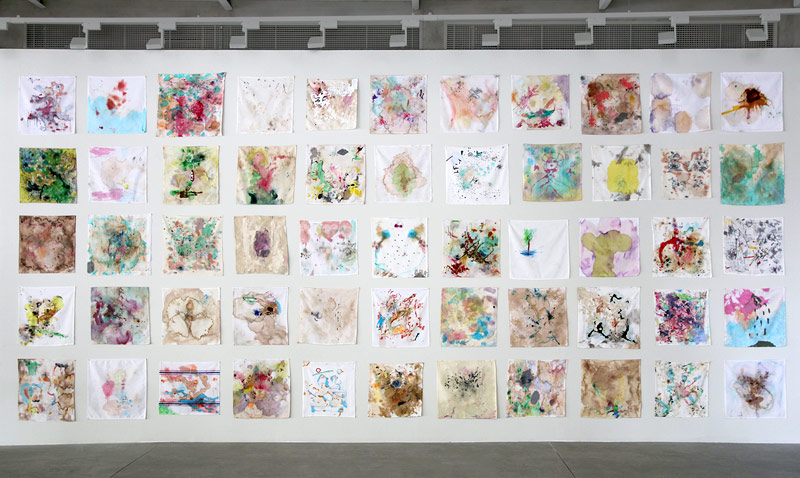 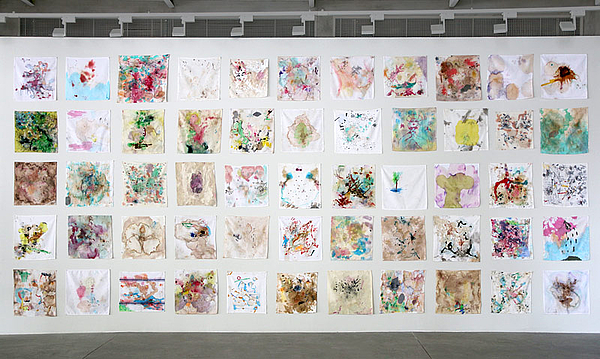 An artist, writer and musician, Ross Simonini is well known for his interviews, dialogues and writings about artists, philosophers, thinkers and actors. These efforts have culminated in a body of work that navigates the space of the ‘unknown’ in contemporary cultural production—a realm that falls outside of public view but is an extension of artistic endeavours.

For SB13, Simonini presents Anxiety Napkins (2013–17), a large-scale wall installation, in which the artist has consolidated a collection of restaurant napkins that he used, soiled, scribbled upon and stole from establishments he patronised. According to the artist, ‘Anxiety napkins are born in expensive American restaurants, places where white, crisply ironed cloths wait at your table, folded peacefully. It’s a luxury to eat out, and the more financially draining an establishment, the finer the napkin will be—the higher the thread count’. He carried them with him for weeks, marking down sensations in his body and mind, as well as the environment and people around him. He eventually brought them to his studio, where they were used to sop up paint spills as he focused on how he felt while the stain set into the fabric. When the biennial closes, the napkins will be returned to this ongoing process, placed into a stack of foraged, unfinished napkins that continue to accrete experience.
(From the SB13 Guidebook)