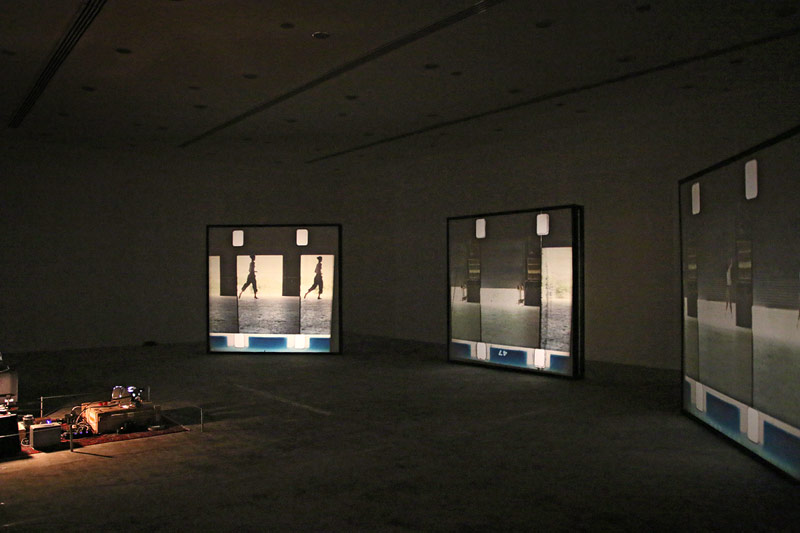 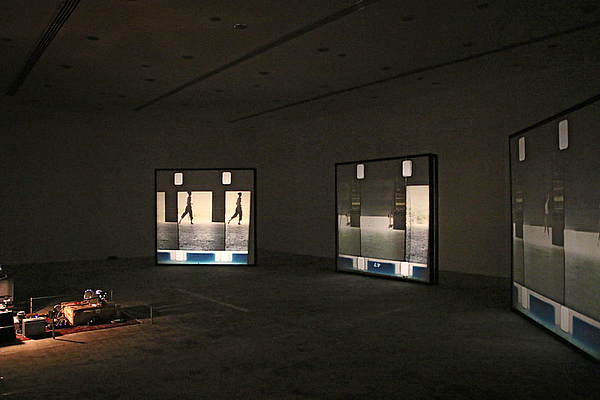 Informed by cinema, colonial history, the politics of technology and narrative structures, Nida Sinnokrot began working in 1998 on what became Horizontal Cinema, a body of interactive film installations that lay bare the politics of the apparatus and its attendant notions of narrative and causality. The mechanics of Sinnokrot’s horizontal cinema apparatus literally turn traditional projections on their side, and the resultant vertical frames are screened through modified projectors onto three screens within the exhibition space. Images are not bound by a regular frequency of 24 frames per second, but rather move at varying rates in response to audience interaction. Walking drives the machine, and in turn, the film registers every step with tiny scratches in the celluloid. As the viewers’ steps surround the work, they are echoed by those of the motor, whose amplified intervals provide a synchronous soundtrack mirroring their pace.

In Sinnokrot’s 16 millimetre film installation When Her Eyes Lifted (1998/1999), a woman opening a door becomes a transformative experience. The imagery of the film takes on an ephemeral painterly quality, changing tone as the film’s emulsion slowly becomes exposed through tiny scratches registered with every step of the audience. In turn, the projections themselves alternate from dark to light, exposing, like a camera shutter, the mechanics of the installation. Here, questions of power, gesture, surface, space and agency are raised, provoking an examination of the machine and its material impact on representation.
(From the SB13 Guidebook)