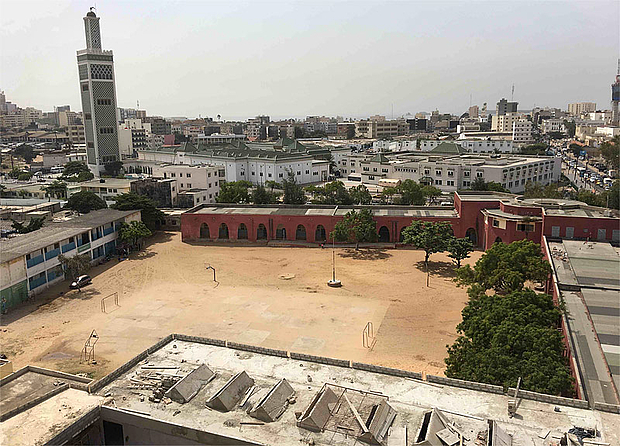 Taking place at the Université Cheikh Anta Diop in Dakar, Senegal, Vive l’Indépendance de l’Eau [Long Live the Independence of Water] is the first of the four Sharjah Biennial 13 off-site projects. SB13 curator Christine Tohmé has invited artist Kader Attia to be the interlocutor who researches and dialogues with the keyword ‘water’.

Attia has conceived and organised a programme of workshops, symposiums and performances that theoretically and artistically explore the keyword ‘water’. His intervention takes place within SB13’s broader examination of the fundamental elements of human existence – networks, infrastructures, and more directly, natural elements such as earth, crops and the culinary.

Water is a life-and-death force; it sustains, soothes and extinguishes. It is both an internal component of the human body and an external linkage between myriad peoples, in ways either positive or deeply destructive. Aptly, Attia has chosen the Atlantic port town of Dakar, located in the Cap-Vert Peninsula, from which to launch his multidisciplinary investigation of water. Dakar’s coastal positioning echoes that of Sharjah. In placing these two cities in conversation with one another, as cities turning away from the sea, Attia brings to the surface commonalities in their divergent histories. Yet the investigation into these sometimes fraught histories is nevertheless timely and helps to contextualise the struggles of contemporaneous societies.

In Vive l’Indépendance de l’Eau, the exploration of water draws on modern-day environmental and ecological concerns and traces their connection to the historically rooted grievances of the ‘Global South’. The hazards of global warming and rising ocean levels are particularly acute in the South, where natural disasters can damage the already limited infrastructures for wastewater collection, jeopardise public health and compound social inequalities. In these regions, water is also increasingly commoditised and privatised, leading to unequal access to drinking water.

Meanwhile, the hegemonic vision of development through monumental construction imposed on countries like Senegal, particularly construction of dams and artificial lakes, has destroyed agrarian ecosystems and furthered the South’s debt burden. This problematic present-day notion of progress has parallels to the ‘cargo myth’, which attributed the advent of modernity to the presence of seafaring settlers.

Colonialism in Africa gave rise to mass deportation and displacement during the slave trade. It is a historic juncture that adds a traumatic layer of significance to the connection of the African psyche to water. This trauma continues to be played out in the relationship between today’s migrants and water; as waves of Senegalese people head on makeshift boats towards the Canary Islands – their closest access to Europe – some do not survive the journey, and their lost lives sadly echo those of their ancestors.

Vive l’Indépendance de l’Eau is focused around two polarised understandings of water – the cultural and the political. The programme presents a panorama of viewpoints related to these two understandings; poetry, magic and animist beliefs are explored alongside issues of power, control, economy, colonial legacies and hegemonic modernities.

The first day of the workshop, titled Beliefs and Non-Knowledge, considers water in conjunction with traditional animist and contemporary rationalist beliefs. Drawing on architecture, film, image and text, the programme juxtaposes various proposals for knowledge sharing. Moroccan poet Rachida Madani and Algerian poet Pierre Amrouche will explore the metaphysical power of poetry. Senegalese anthropologist Dr Ibrahima Sow will discuss the power of sand, water’s alter ego, through divination. German hydrologist and artist Christoph Keller will visually narrate water’s empire in his film on the cosmology of the Yanomami tribe titled Anarcheology. French artist Marcel Dinahet will elaborate on his longstanding interest in filming cities from the sea. Pakistani architect Samia Rab will consider coastal architecture with reference to rising sea levels, and Algerian architect Yasmine Terki will highlight the connection between earth and water in her discussion of clay architecture. Finally, curator Nadine Bilong will trace the links between traditional beliefs about water spirits with modern iconography, such as that of Mami Wata in her country Cameroon.

The second day of the workshop, titled About the Everyday Life's Political Control of Liquidity, examines socio-political and historical understandings of water, with particular emphasis on ethical dimensions. Senegalese artist Kemi Bassene, together with activist and ecologist Ali Haidar, will propose a socio-political, historical and juridical re-interpretation of water in the Peul territories of north Senegal. WatchTheMed artists and activists Charles Heller and Lorenzo Pezzani will present their research findings on Senegalese migrants. German filmmaker and theorist Hito Steyerl’s film Liquidity will explore the metaphorical links between the elemental dynamic of water, human productivity and neoliberal capitalism. Algerian philosopher Seloua Luste Boulbina will discuss postcolonial legacies in the social connection with water. Ghanaian writer and filmmaker Nana Oforiatta-Ayim will critique the modern epistemology of water sciences and myths and trace its associations with the Western colonial project, and cofounders of the collective of curators le peuple qui manque [a people is missing] Kantuta Quiros and Aliocha Imhoff will draw on their numerous politically charged projects of tribunal reenactments to explore the implications of water on population movements.

The second day also features poetry and music, including a live performance from Serer village women together with an explanation of their songs from Professor Malik Diouf of the Institut Universitaire de Pêche et d'Aquaculture (IUPA) [University Institute of Fishing and Aquaculture (IUPA)].

As the workshop draws to a close, each participant will contribute an object, story, soundtrack or image that subjectively evokes the importance of water. In this way, the varied perspectives and interventions will be brought together and archived in a temporary museum, which extends beyond the duration of Vive l’Indépendance de l’Eau. Like SB13’s chip-ship, an online repository of research material, the Dakar exhibition will provide an enduring source of information and inspiration for future investigations and collaborations.

Working in a wide range of media, including photography, video, sculpture, drawing and installation, Kader Attia reflects on the aesthetics and ethics of different cultures and takes a poetic and symbolic approach to exploring the repercussions of Western cultural hegemony and colonialism for non-Western societies. Solo exhibitions of his work have been presented at the Museum für Moderne Kunst, Frankfurt am Main (2016); Musée Cantonal des Beaux Arts, Lausanne (2015); Beirut Art Center (2014); Whitechapel Gallery, London (2013); KW Institute for Contemporary Art, Berlin (2013) and Musée d’Art Moderne de la Ville de Paris (2012). His work was also featured in group shows at the Museum of Modern Art, New York (2013) and Tate Modern, London (2011) and well as various biennial exhibitions, including Dak’Art, Dakar Biennale, Senegal (2016); Marrakech Biennial (2014, 2016); dOCUMENTA 13, Kassel, Germany (2012); Venice Biennale (2003, 2011) and Lyon Biennale, France (2005). His work is part of the collections of the Centre Georges Pompidou, Paris; Institute of Contemporary Art, Boston; Tate Gallery, London and Museum of Modern Art, New York, among others. He was the recipient of the Prix Marcel Duchamp (2016), Abraaj Capital Art Prize (2010) and Cairo Biennial Prize (2008).

Christine Tohmé is the founding director of Ashkal Alwan, the Lebanese Association for Plastic Arts, a nonprofit organisation established in 1993 that initiates and supports contemporary artistic practice. In 2002, Tohmé launched the multidisciplinary platform Home Works: A Forum on Cultural Practices; in 2011, she started the free tuition Home Workspace Study Program.
She is the recipient of the Prince Claus Award (2006) and CCS Bard Audrey Irmas Award for Curatorial Excellence (2015). Tohmé is curator of Sharjah Biennial 13, taking place between October 2016 and October 2017.
siehe die Biographie