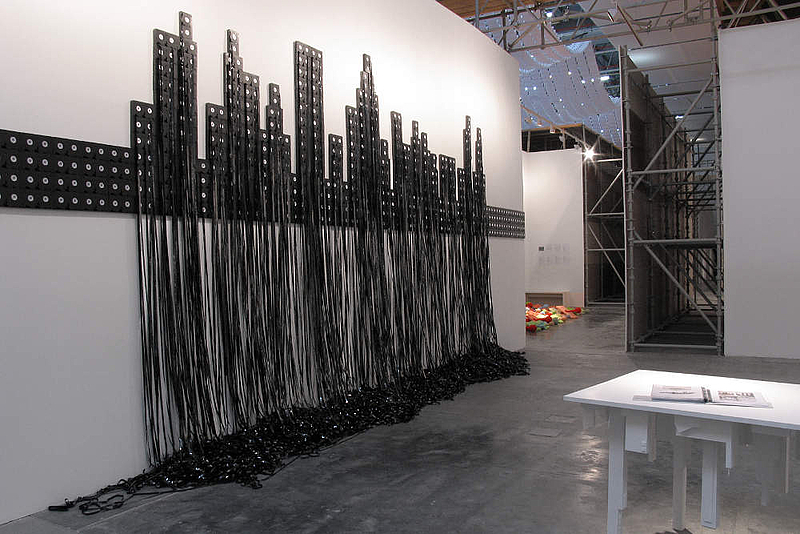 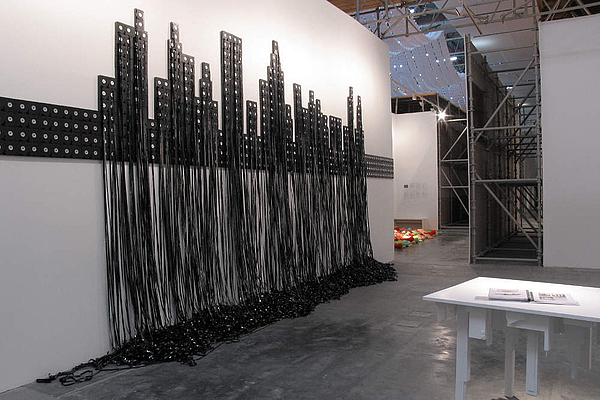 Underneath. 2007
3 modified tables and a wall-painting

A special project for the Sharjah Biennial 8 based on a former architectural work by Mounir Fatmi called Ovale Project, and a video entitled Horizontal Fall, showing the deconstruction of a building.

The video tapes on the left wall make up a cityscape. The buildings under the tabletop symbolize "the world upside-down".

With Underneath, the main idea is to show the world literally upside down. Since 9/11, the balance has totally changed and a new force has emerged in the geopolitical landscape as we know it. The threat and the power come from the Eastern part of the globe and, for the first time in centuries, the Western countries have to adapt to this new situation. Everybody knows now that the Earth is cut in two by an invisible line, similar to that of the equator, which divides North (rich) from South (poor). In this unstable period, where money doesn’t guarantee security, people are looking for new values to bequeath to the next generation.

For the installation, three tables are placed in a room and under each table people can see the wooden sculptures of the skyscrapers of a big modern city. Those cities generate a lot of pollution. When you look on the top, those are regular tables and they symbolise a discussion area for ecological topics. It’s a very trendy subject. But it’s uncomfortable to sit down at these tables, the sculptures beneath get in the way. On the wall, there are three video projections showing different landscapes (urban or natural). It’s a geographical disturbance: you don’t know when or where the pictures were taken and you don’t know what “paradise” we are trying to reach.