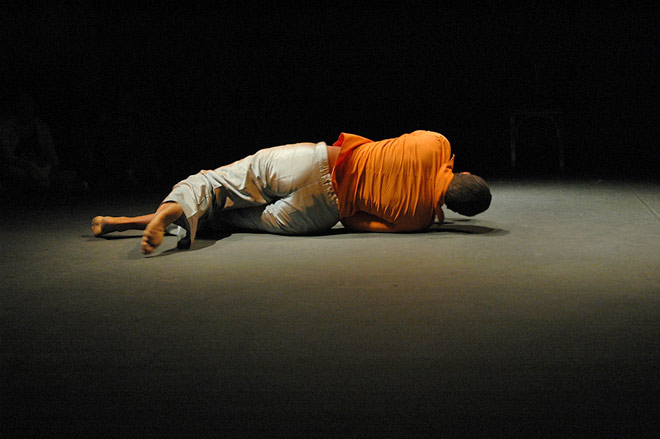 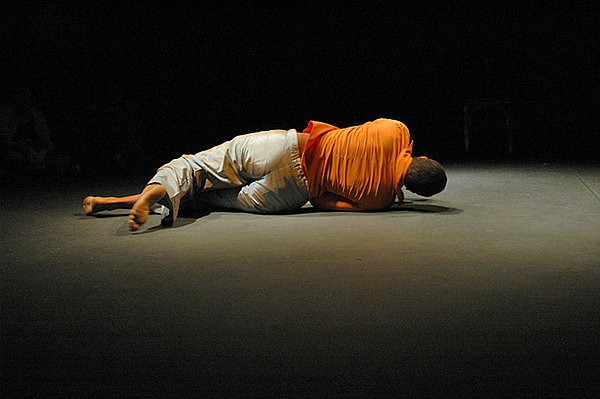 My Possession, 2005
Video, 31’28’’. Dokumentation einer Performance
Regie: Eduardo Abad
A barefoot black woman enters a near-pitch-black scene; a single light beam shines upon a chair. The daughter of a Kenyan man and a German woman, this European woman, “mixed” by the reverberations of deep-seated colonialist ways —that do not spare her from uncomfortable situations— carries issues relating to her diasporic condition on her own skin and hair. She uses the cultural and social discrimination she has suffered as the content of her work. In discontinuous, vibrating movements, she deconstructs logical possibilities, disabling any attempts at programmed identification on the observer’s part. Human and animal merge in shrill screams, when the apparent lack of control flows.

Mwangi Hutter is the common name adopted in 2005 by the artists Ingrid Mwangi and Robert Hutter, who work with video, photography, installation, sculpture, and performance, using their own bodies to reflect about changing social realities. They both earned new media degrees in Germany, undertook artist residencies at the Cité Internationale des Arts, in Paris, and featured in the São Paulo and Venice biennials, among other exhibitions in Africa, Asia, Europe, United States, and South America.