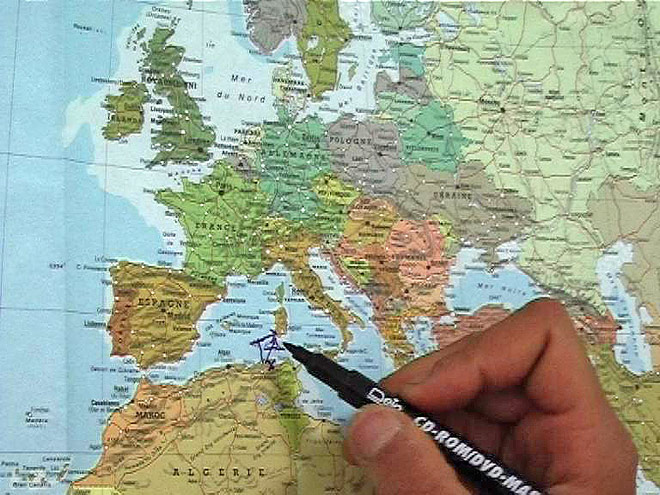 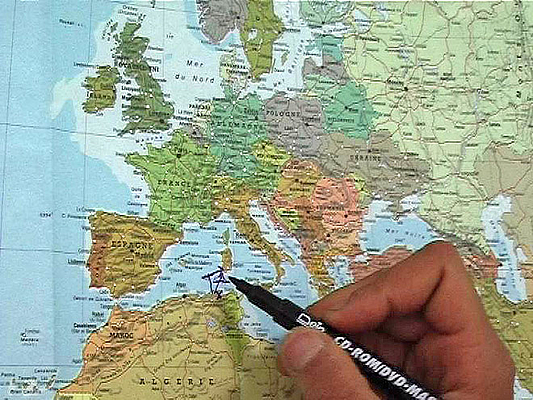 Four selected videos from The Mapping Journey Project, 2008-2011
Vierkanal-Videoinstallation
A map and a hand that moves on it. In each of the videos, a refugee or migrant outlines their path from Africa to Europe on a map. These are the trajectories of people who experience, on their bodies, on a daily basis, the planet’s landform-ridden physical and political landscape. These are the trajectories of people who are hiding, people whose social existence is erased. Along these routes, straight lines are unthinkable. They build a counter-cartography of the Mediterranean region, in which personal stories and political boundaries converge. Recounting someone’s trip and drawing their trajectory are ways of measuring, directly on the map’s surface, the distance between hope and reality.

Bouchra Khalili‘s work (film, video, installation, photography, and prints) articulates language, subjectivity, and transitional territories to investigate strategies and discourses of resistance as elaborated and narrated by members of minorities. It has been internationally exhibited at La Triennale, Palais de Tokyo (Paris, 2012); the 18th Biennale of Sydney (2012); MoMA (New York, 2011); and the 10th Sharjah Biennial (2011); among others.