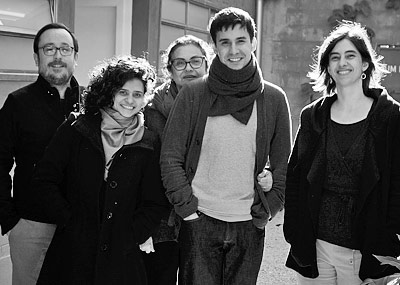 Solange Farkas is the curator and director of Associação Cultural Videobrasil, and the founder of the Contemporary Art Festival Sesc_Videobrasil, first held in 1983. She was the director and chief curator of the Bahia Museum of Modern Art from 2007 to 2010. She was also a guest curator for the 10th Sharjah Biennial (United Arab Emirates, 2011), the 16th Biennial of Cerveira (Portugal, 2011), the 5th Videozone – International Video Art Biennial (Israel, 2010), FUSO – Annual Video Art Festival (Portugal, 2011 and 2013) and the 6th Jakarta International Video Festival (Indonesia, 2013).

Ana Pato is a curator and researcher. With a doctorate degree from the School of Architecture and Urban Design of the University of São Paulo (FAU-USP), she was the chief curator of the 3rd Bahia Biennale (2014) and the projects director of Associação Cultural Videobrasil (2000-2012). She is the author of the book Expanded Literature: archive and quotation in the work of Dominique Gonzalez-Foerster (2012).

Beatriz Lemos is a curator specializing in arts and digital networks. The holder of a master’s degree in Social History of Culture from the Pontifical Catholic University of Rio de Janeiro (PUC-RJ), she is the editor of publishing house Sismos Editoria, and the creator of the online platform Lastro. Since September 2015, Lemos has been a member of Parque Lage Visual Arts School’s Visiting Curator program.

Diego Matos is a researcher, professor and curator. He holds master’s and doctorate degrees from the School of Architecture and Urban Planning of the University of São Paulo (FAU-USP). Matos was assistant curator for the 29th São Paulo Art Biennial (2010) and for the 18th Contemporary Art Festival Sesc_Videobrasil (2013). From 2014 to 2016, he coordinated Associação Cultural Vidoebrasil’s Archive and Research Team.

João Laia is a writer and curator. He has curated for venues including the Moderna Museet, in Stockholm; the Chiado National Museum of Contemporary Art, in Lisbon; Videoex, Zurich; Delfina Foundation and the Whitechapel Gallery, both in London; and Parque Lage, in Rio de Janeiro. Laia is a contributor to international media outlets such as Frieze, Mousse, Flash Art, Terremoto, and Público.