Created by artist duo Detanico Lain, the art direction and the visual identity of the 19th Contemporary Art Festival Sesc_Videobrasil | Southern Panoramas explore concepts from this edition’s curating and harks back to Greek philosophy and scripts that originated in Africa 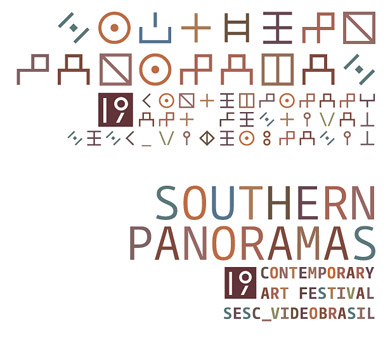 The Brazilian-born, French-based artists Angela Detanico and Rafael Lain have worked together since the mid-90s, a period almost as long and prolific as their partnership with the Contemporary Art Festival Sesc_Videobrasil. The duo, whose works have been shown at the Venice Biennale (2007), São Paulo Art Biennial (2004, 2006 and 2008) and Havana Biennial (2009), took care of visual identity in five different Festival editions, from the 13th through the 17th (from 2001 to 2011). Now, they will art direct again for the 19th edition. Building on global South art production issues that the curating addresses, like identity, memory and iconography, they devised a visual concept for the Festival that harks back to African alphabets and the myth of the origin of writing.

To Solange Farkas, the Festival’s chief curator, Detanico and Lain breed a new creative, poetic universe through their contemporary art inquiries and productions. Underpinned by extensive research and reflections on meaning and its graphic representation, the duo’s work explores the art-design connection. “They appropriate themselves of verbal language through visual propositions, creating exercises in language encoding and decoding and construction of new codes, organized into a new ‘script,’ in a proposal that relates to issues brought up by this Festival edition,” says the Associação Cultural Videobrasil director.

After the announcement of the 19th Festival’s first guest – one of the most revered contemporary artists from Africa, Mali’s Abdoulaye Konaté –, Detanico and Lain started researching the numerous writing systems that originated in the African continent, from ancestral alphabets and syllabaries to the latest proposals for preserving oral tradition. One of the early references in their research was the work of Frédéric Bruly Bouabré (1923-2014), an Ivory Coast artist featured in the 55th Venice Biennale (2013), the 30th São Paulo Art Biennial (2012) and the Documenta 11 (2002). In the 1950s, Bruly Bouabré designed an expansive pictorial syllabary of 400-plus characters to document the history of his people, transmitted orally in the Bété language. “From then on we set out researching African writing systems, which led us to other alphabets created recently for oral tradition-based languages, like Sierra Lione’s Kikakui and Congo’s Mandombe,” Detanico and Lain say. Beyond the young African alphabets, the duo’s research also includes age-old scripts created in North Africa, like the Tifinagh alphabet employed in the writing of northern Berber languages, and Ge’ez, which has outlived the language spoken in Ethiopia and Eritrea.

Plato’s dialogue Phaedrus also lays the groundwork for Detanico Lain’s research work. The Greek philosopher addresses the myth of the origin of writing and states that graphic characters were invented by the Egyptian deity Thoth, the creator of numbers, calculus, geometry and astronomy. Regarding script, Thoth allegedly said: “Here is an art that shall make Egyptians wiser and help them strengthen their memory, for in writing I have discovered the remedy for memory.”

Working with these references, the duo designed the Tautográfica [Thothgraphics or Tautographics] typography, using graphic elements shared by the alphabets they researched. “The idea is to have characters act as image and text at once, creating a sort of defamiliarization with language,”theartists explain. This affords readers the possibility to rediscover the designs of letters – illegible at first, the reading unravels to those who put in the time to decipher it. Tautográfica will be applied in tandem with the Fedra font created in 2001 by designer Peter Bilak. This typographic font was also created for the Arab, Devanagari and Armenian alphabets, and its design is intended to humanize the message and enable good reading both in print and on computers. Featuring a palette of earthy tones, with variations based on the works of other 19th Festival guest artists, the visual identity put together by the Detanico Lain duo will unfold into signs at the exhibition spaces, publications, printed materials and the 19th Festival website, applied by designers Carla Castilho and Lia Assumpção (Janela Estúdio) and Lila Botter (Videobrasil) and by the artist Deco Farkas.

Angela Detanico and Rafael Lain are respectively a linguist and a typographer by trade. Working in collaboration since 1996, they started out by developing ideas on writing, reading and translation, either from one medium to another or from one code to another, in an attempt to explore the boundaries of representation in time and space. The duo combines poetry, sound and image to create both design and contemporary art pieces. Typography, graphic design, video, architecture, internet and CD-ROM are some of the formats covered by the artists, who were featured in the first-ever edition of Videobrasil’s FF>>Dossier, with interviews and essays by researchers Giselle Beiguelman and Eduardo de Jesus.

Besides creating the visual identity for the Festival from 2001 to 2011, they were also members of the event’s programming board (2001 and 2003). They also created performances whose footage is now part of the Videobrasil Collection (Entre, Dobra 24.9.2003, Sound Waves for Selected Landscapes). Angela Detanico and Rafael Lain were special Public Programs guests during the 18th Contemporary Art Festival Sesc_Videobrasil (2013), which marked the Festival’s 30th anniversary with several meetings as the event unfolded. Alongside other artists and designers who have contributed to the Festival’s identity, including Kiko Farkas, Bill Martinez, Daniel Trench and Celso Longo, the duo participated in the “Design, Concept and Space” meeting, where they discussed the unique character of the Festival’s graphic concepts, spawned by a collaboration between designers and curators. The visual identity of the Festival reflects and highlights the issues brought up by each new edition.

Detanico Lain won the 2004 Nam June Paik Award – one of the world’s foremost electronic art prizes – and have shown their work at the 52nd Venice Biennale (Italy, 2007), in three São Paulo Art Biennial editions (2004, 2006 and 2008) and at the 10th Havana Biennial (Cuba, 2009). Detanico & Lain also participated in the Media City Seoul (South Korea, 2004) and the Echigo Tsumari Art Triennale (Japan, 2006). They had recent solo exhibits at the Fundação Iberê Camargo (Porto Alegre, Brazil, 2013), curated by Associação Cultural Videobrasil founder and director Solange Farkas, at the Museu Coleção Berardo (Lisbon, Portugal, 2013) and at the Kyoto Art Center (Kyoto, Japan, 2013). Their work was shown recently at the Musée d'Art Contemporain de Lyon (Lyon, France); at the Wexner Center for the Arts (Columbus, USA); and at the Astrup Fearnley Museet (Oslo, Norway).