Olafur Eliasson: Your body of work 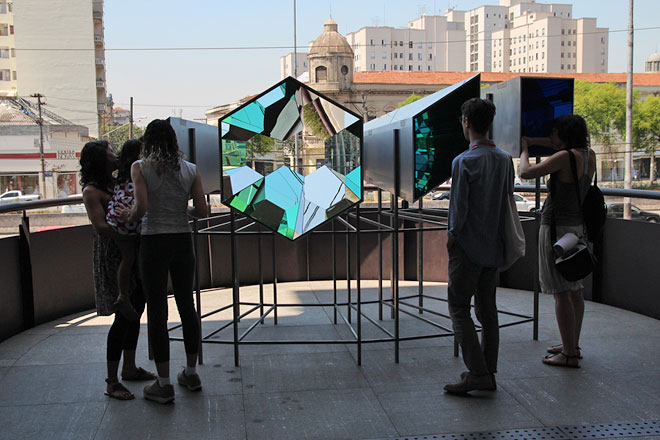 The artist presents eleven installations, eight of which were especially created for São Paulo.

Devised by Olafur Eliasson as a response to the city of São Paulo by invitation of the 17th Festival, Seu corpo da obra is a show featuring eleven installations and one work made in collaboration. The artworks entice the audience to experiment with their own perceptions of color, spatial orientation, and other modes of involvement with reality.

The artworks are on display at SESC Pompeia, SESC Belenzinho and Pinacoteca do Estado. "The exhibition proposes a network of experiments based around a temporary geography for São Paulo, creating narratives that add up to the viewerʼs experience," says Jochen Volz, exhibition curator and artistic director of Instituto Inhotim, in the state of Minas Gerais.

For the recently inaugurated SESC Belenzinho facilities, Olafur Eliasson created a rotating device that projects light beams into space. At Pinacoteca do Estado, he concentrates on experiments with mirrors, a classical tool in art, to converse with the architecture of the eclectic neoclassical building that underwent an intervention by architect Paulo Mendes da Rocha one decade ago.

At SESC Pompeia, a set of works involving color, light and fog turns the 1,500 squaremeter interaction area into a labyrinth of sensorial experiences. In the Galpão [warehouse], Eliasson experiments with the notion of afterimage – the counter image that stays on the retina after exposure to light – and with images of São Paulo, in an artwork created in collaboration with the Brazilian filmmaker Karim Aïnouz.

The exhibition also features Waterfall, 1998, at the deck of the SESC unit.

Seu corpo da obra is also the theme of talks, a book to be released in November, and a film of the Videobrasil Authors Collection series, directed by Aïnouz (Madame Satã, O céu de Suely, O abismo prateado) and scheduled for release in 2012.

Olafur Eliasson (IS/DK) was born in 1967 in Copenhagen, Denmark. Since 1997, he has exhibited worldwide: He represented Denmark at the 50th Venice Biennale in 2003 and later that year installed The weather project at Tate Modern, London. His first major solo exhibition in Denmark was Minding the world at ARoS, Aarhus Kunstmuseum, in 2004. Take your time: Olafur Eliasson, a survey exhibition organised by SFMOMA in 2007, travelled until 2010 with venues including Museum of Modern Art, New York. The exhibition Your chance encounter at 21st Century Museum of Contemporary Art, Kanazawa, in 2009, included the outdoor work Colour activity house. Innen Stadt Aussen (Inner City Out), his exhibition at Martin Gropius Bau in 2010, involved interventions across Berlin as well as in the museum. The exhibition Three to now was on view at Harvard University Graduate School of Design until spring 2011.

Eliasson has made several projects in public space: for example, Green river, carried out in various cities between 1998 and 2001, and the Serpentine Gallery Pavilion 2007, designed together with Kjetil Thorsen and temporarily situated in Kensington Gardens, London. Commissioned by Public Art Fund, The New York City Waterfalls were installed on Manhattan and Brooklyn shorelines during summer 2008. Your rainbow panorama, a 150 m circular walkway with coloured glass panes, placed on top of AroS Museum in Aarhus, Denmark, opened in May this year. Harpa Reykjavik Concert Hall and Conference Centre, for which Eliasson has created the façade in collaboration with Henning Larsen Architects, was inaugurated in August 2011.

Established in 1995, his Berlin studio today numbers about forty-five craftsmen, architects, geometers, and art historians. In April 2009, as a professor at the Berlin University of the Arts, Olafur Eliasson founded the Institut für Raumexperimente (Institute of Spatial Experiments).

Hemisfério compartilhado (1-6), 2011
[Shared hemisphere] Each of the six hemispheres consists of a polyhedron (four of which are made of concrete, one of glass and one of wood), attached to a circular mirrored surface. This reflects the surroundings and the polyhedric geometry.

Seu caminho sentido, 2011
[Your felt path] Fluorescent lights are set in the back of a fog-filled room giving it a different sense of volume. Visitors enter a room and walk toward the light, exploring a long gradient of visibility.

Seu corpo da obra, 2011
[Your body of work] Translucent panels in cyan, magenta and yellow are organized in a labyrinthic grid. When visitors walk between the panels, new chromatic variations appear.

Sua cidade empática, 2011
[Your empathic city] Created in collaboration with Karim Aïnouz. The work consists of 24 spotlights, projecting colors in trapezoid shapes onto a wall. These changing color patterns are superimposed with short black and white films shot in São Paulo.

The structural evolution project, 2001
[Projeto de evolução estrutural] Devised as a platform for continuous architectural re-construction, this work requires the participation of the visitors, who are invited to build, using so-called Zome Tools, infinitely varying compositions.

Waterfall, 1998
[Cachoeira] This work offers visual, auditory and kinaesthetic perceptions of a waterfall while questioning our relationship with nature and the environment.

Esfera de luz lenta, 2011
[Slow light sphere] This spherical work consists of a metal structure with glass and mirror plates that dematerialize its interior while redefining the surrounding space through fragments of light and reflections.

Microscópio para São Paulo, 2011
[Microscope for São Paulo] In the inner courtyard of the museum, Eliasson has installed four inclined walls of mirror foil reaching to its latticed skylight, thus generating a kaleidoscopic space that infinitely reflects the metal framework and the daylight from above. The mirror foil panels are supported by exposed scaffolding. As visitors progress along the walkway that crosses the patio, they are enveloped in the reflections created by the mirrors.
Collapsing inner space and outside, Microscopio para São Paulo realizes a central aspect of the exhibition which closely concerns itself with the relationship between museum and city, architecture, space and perception.

Seu planeta compartilhado, 2011
[Your shared planet] Sheets of glass with colour filters and mirrors turn the Belvedere (the museumʼs terrace) into a kaleidoscope that offers kaleidoscopic glimpses of the city in hues of green, yellow, blue and red.

Take your time, 2008
[Tome seu tempo] In the octagonal center of the Pinacoteca, a large circular mirror affixed at an angle to the ceiling rotates slowly on its axis, destabilizing the visitorsʼ perception of space. This work was first shown at P.S.1 Contemporary Art Center, as part of a large survey of Eliassonʼs work at the Museum of Modern Art (MoMA), New York, in 2008.

Olafur Eliasson:
Your body of work