An Unpredictable Expression of Human Potential 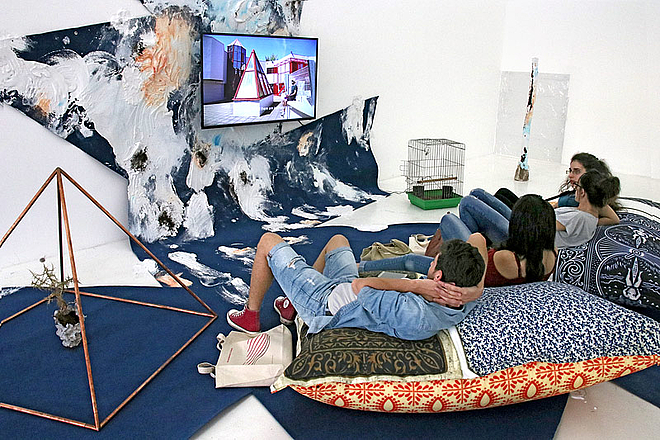 Riots shake the Parisian suburb of Seine-Saint-Denis after the alleged rape of young Théo by police, an outrage haunted by the strangling of a young black man named Adama Traoré who died whilst in police custody one year earlier. Angry residents confront the charred carcass of the burnt-out Grenfell tower block in London. A generation of young Syrians grow up paralyzed by their refugee status in Lebanon.

Young people’s experience around the world today, both mediated and direct, is an encounter with daily structural violence, marked by a continuous distrust of the state, and shaped by exclusion from the national and global neoliberal narrative.

Instead of asking for solutions from art and sketching nostalgic utopias that take recourse in failed leftist projects of the recent past, this exhibition seeks to respond to the present global moment in which a paradigmatic shift can be sensed in the air and through cultural expression. The exhibition’s title is drawn from journalist Joshua Rothman’s analysis of Raymond Williams’ definition of “culture” as the organic, heterogeneous and disobedient inversion of the disciplinary thrust of “civilization.” Ever shifting and subject to dynamic re-appropriation, culture is central to a younger generation’s expression of frustration with and protest against the rampant violence of the state and decisions imposed on them by older generations – an inheritance they did not ask for and did not shape.

Artists are invited to express, define and participate in the tectonics of this moment.

Projects coalesce around and emerge from youth culture, social anger and unrest, carceral urban environments and trafficking, while disregarding the conventions of art, design, literature, film, fashion and poetry. The exhibition thus aims to reflect the complex entanglement of a pan-global climate of entropy and failed (but ever manipulated) nationalisms, and the energy of youthful rejections of received narratives. Artists are drawn together from across metropolises such as Lisbon, Athens, Tétouan, Algiers, Paris, Berlin, Casablanca and Beirut to represent diverse perspectives that converge in a viewpoint, surveying the state of things on the ground through irony, sincerity, criticality and celebration.