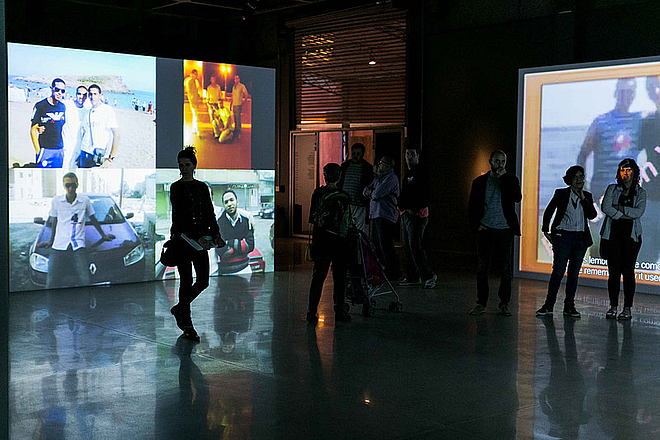 Associação Cultural Videobrasil presents Tomorrow Everything Will be Alright, the first solo show in Brazil of the Lebanese artist Akram Zaatari, spanning the whole 800 sqm of Galpão VB. The co-founder of the Arab Image Foundation – devoted to studying and preserving the photographic heritage of the Middle East and North Africa – and one of Middle East’s premier artists active today, Zaatari has a deep connection with the Associação, as he has been selected for eight different editions of the Contemporary Art Festival Sesc_Videobrasil.

History, documents, photographic practices, desire, labor, and human relationships are some of Zaatari’s recurring themes, which he explores in films, photographs, text and other forms. His works deal with pivotal moments in history around him, and could therefore be seen as a subjective historical account of contemporary Lebanon.

For this exhibition, curator Solange Farkas and co-curator Gabriel Bogossian picked six video works and a set of drawings that share an emotive element carving a path across Zaatari’s oeuvre from 1998 until 2016. The works themselves explore questions of love –or its loss-, representation of oneself, covering and uncovering the body, the ephemeral nature of desire, and how all of this manifests itself in real time as seduction, pride, and machismo in the context of the changing technology of communication, the Internet. The works stimulate us to look at mechanisms of human relationships, intimacy between men and same-sex love in an Arab context. Zaatari’s work lets the social describe the urban, lets memory occupy desire and lets desire write history.

Beirut is the center of two important works in the show; once as a past memory in Red Chewing Gum (2000) and another time as a futuristic, near-post-apocalyptic landscape in Beirut Exploded Views (2014).

Three of the pieces will be having their Brazilian premiere. Dance to the end of Love (2011) is completely made with video material taken by individuals in Egypt, the UAE, Saudi Arabia, Palestine, Yemen, and Libya and uploaded onto YouTube. Four different video channels are divided into themes including magic, bodybuilding, car stunts, dancing, and music. Another Resolution (2008/2013), an installation featuring 12 micro projectors, shows adults mimicking the poses of children in old family pictures. The work examines the passage from childhood to adulthood; gender construction that was vehicled through photography. Beirut Exploded Views (2014) follows two boys trying to inhabit a fragmented city post apocalypse. This is one of two works in the exhibition about Beirut. The narrative is inspired by the current refugees crisis in Lebanon, at once looking for home, but also eager to communicate, and trying to protect themselves in a hostile context.

The three other featured pieces are part of the Videobrasil Collection and have been shown before in São Paulo, in different editions of the Contemporary Art Festival Sesc_Videobrasil, and in special showings. Tomorrow Everything Will Be Alright (2010), Grand Prize winner at the 17th Festival, is an intense love story that unfolds on an analog typewriter and lends its hopeful title to the whole exhibition at Galpão VB. Red Chewing Gum (2000) is another work in this exhibition that is set in Beirut, and imagines the urban geography of Hamra district through a recollection of love. It is a reflection on the end of a relationship between two men after love is consumed. The work takes the form of a video letter in which the story unfolds and through which Hamra’s history, once a bustling shopping district, is evoked. The End of Time (2012) is a choreography about love and separation enacted by three male characters, who play the beginning and the end of desire, and the ephemerality of passion. This is a work essentially about preservation. It was Zaatari’s contribution to dOCUMENTA13 in 2012.

Tomorrow Everything Will Be Alright features public programs activities including meetings where Brazilian artists, curators, and researchers, who will explore how Zaatari’s productions converse and intersect with those of Brazilian artists and researchers. A purposely created educational program, developed with the goal of familiarizing the public with the repertoire that the artist explores, also draws a parallel between key aspects of his output and the cultural experience of Brazil. As part of the exhibition project, critical essays on Akram Zaatari’s work will be compiled into the first reference book on the artist ever published in Brazil. The launch will happen at November 5 (Saturday) 3pm, at Galpão VB.

Akram Zaatari – Tomorrow Everything Will Be Alright is an exhibition produced by the Brazilian Ministry of Culture and by Associação Cultural Videobrasil under the Federal Culture Incentive Law, and sponsored by the Government Press Office. Held in partnership with Electrica Cinema e Vídeo and Galeria Kurimanzutto, it also relies on support from the Government of the State of São Paulo.

About the Artist
Akram Zaatari has produced more than forty videos, a dozen books, and countless installations of photographic material, all pursuing a range of interconnected themes, subjects, and practices related to excavation, political resistance, the lives of former militants, the legacy of an exhausted left, intimacies among men, the circulation of images in times of war, and the play of tenses inherent to various letters that have been lost, found, buried, discovered, or otherwise delayed in reaching their destinations.

Zaatari has played a critical role in developing the formal, intellectual, and institutional infrastructure of Beirut’s contemporary art scene. He was one of a handful of young artists who emerged from the delirious but short-lived era of experimentation in Lebanon’s television industry, which was radically reorganized after the country’s civil war. As a co-founder of the Arab Image Foundation, a groundbreaking, artist-driven organization devoted to the research and study of photography in the region, he has made invaluable and uncompromising contributions to the wider discourse on preservation and archival practice. Zaatari has been focusing since 2004 on studying the archive of studio Shehrazade, which was founded by photographer Hashem el Madani.

Zaatari represented Lebanon at the Venice biennale 2013. He has taken part of Documenta 13 (2012), the Istanbul Biennial (2011), and the Sao Paulo biennial (2006). His works are in the collections of Tate Modern, Centre Pompidou, MoMA, and MCA Chicago. He lives and works out of Beirut, Lebanon.

About Galpão VB
A venue for exhibitions, reflection, meetings, and research, Galpão VB was designed to activate the video collection Associação Cultural Videobrasil has amassed in three decades in activity. Focusing on productions from the global South, the Videobrasil Collection comprises artworks featured in the Contemporary Art Festival Sesc_Videobrasil, pieces donated by artists, seminal international video art works, recorded performances, testimonials, documentaries, publications, and documents amounting to nearly 10,000 items – 4,500 of which have been cataloged and are available for public consultation.

Galpão VB is the first facility ever to feature visual arts programming in Vila Leopoldina, in west side São Paulo. Open to the public since October 2015, it includes a gallery, a video room, a reading room, and an open-air garden. Its onsite shop offers the entire collection of books, magazines, and documentaries produced by the Videobrasil/Edições Sesc São Paulo partnership.

Akram Zaatari
Tomorrow Everything Will Be Alright