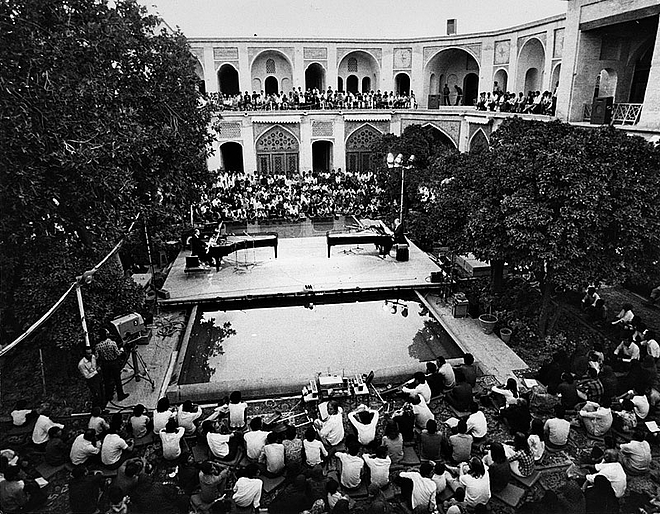 From an unassuming corner of the Bergen Assembly, the international art triennial currently taking place in this small Norwegian city, reverberates an acoustic collage of percussion and a series of dramatic vocal crescendos. The source is a multi-screen, immersive projection of archival footage from the Festival of Arts, Shiraz-Persepolis. A ground-breaking international festival of the performing arts, this was held annually – amongst the spectacular ruins of Persepolis and nearby Shiraz – every summer from 1967-77.

Alongside the filmic footage is presented a rich tapestry of archival materials under the umbrella of curatorial platform and think tank Archaeology of The Final Decade. Curated by Vali Mahlouji, AOTFD’s founder and director, the exhibition Retracing a Utopian Stage: Festival of Arts, Shiraz-Persepolis appears here in collaboration with freethought, a collective working in public research and in curating concepts of political urgency. The latter co-directs the Bergen Assembly this year in concert with Tarek Atoui and PRAXES.

Retracing a Utopian Stage works to unearth the topography, aesthetic vision and praxis of the festival, one whose own curatorial remit and contemporary resonance can both be seen to stretch far beyond its decade-long existence. In the context of the Bergen Triennial, whose second substantiation takes the form of a year-long event culminating in the flurry of activity this September, this reconstruction of the network of ideas that shaped the festival’s original artistic direction as a historical artistic ‘assembly’ is particularly potent and timely. 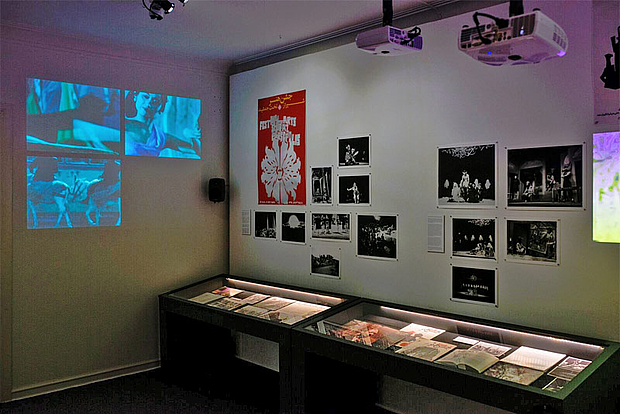 The 2016 edition of the Assembly takes the multi-faceted meanings and resonances of ‘infrastructures’ as its theme, engaging with the subversive possibilities of conceiving of ‘infrastructures’ as ‘sites of affect and contradiction,’ rather than a pre-determining force of manifest culture. As part of this, AOTFD’s Retracing a Utopian Stage appears within the freethought exhibition space devoted to ‘Archives of Substance,’ which explores the affective resonance of archival displays in relation to the ‘substance infrastructures,’ the particular historical moments, atmospheres and assemblages, to which they are testimony.

Within this curatorial remit, Archaeology of the Final Decade re-situates a radical yet ephemeral historical object, from the restricted archives of 1960s-70s Iran, into a contemporary discourse. The linguistic slippage of ‘radical’ to ‘radial’ readily encapsulates the curatorial drive behind this presentation. To hold the manifest complexities of this stage (which, in a literal sense, was often radial in direct contrast to the European proscenium) in view, in working through the various aims and creations of this still-contested space, calls for a radial rather than unilinear relation of the archive to contemporary memory. To paraphrase Peter Berger, ‘a radial system has to be constructed around the [archive] so that it may be seen in terms which are simultaneously personal, political, economic, dramatic, everyday and historic.’ (Berger, John, 2013, Understanding a Photograph, Penguin Books, p. 56)

This uniquely transformative crucible of artistic exchange and experience proposed a radically universalist model of culture. It introduced distant voices from Asia and Africa into the international cultural discourse as valid and equal. The festival formed an authentic nexus for the Third World modernising drives that rooted themselves in a compost of local traditions, and the neo-avant-garde who experimented with ritualisations and welcomed encounters with other cultures in an effort to break away from European artistic traditions. The exhibition takes us through an overview of the festival’s historical situation as a temporary autonomous zone , outside conventional systems of art production and political dogmas. It situates the internal anxiety and antagonism triggered in response to the festival as placing a blind spot over the festival’s radical Third World-ism as a post-colonial model.

Mahlouji’s own curatorial presentation explores the curatorial strategies of the festival itself, which circumvented binaries of modern and traditional, native and alien in order to assert a democratic relational sphere. It takes us from the inaugural year’s presentation of the folkloric commedia dell-arte style ru-hozi , and the ritual of ta-zieh , an indigenous form of passion play banned since 1993, to the correlation of the dramatic conventions and staging devices of this medieval form with contemporary meta-theatrical sensibilities. 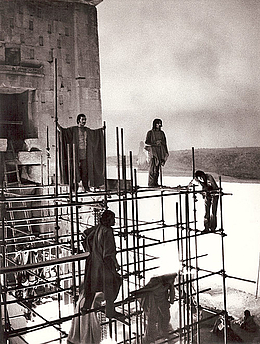 Sub-sections present yearly themes such as Percussion (1969) and Theatre and Ritual (1970) which consciously set out to map a modern discourse around co-existing heterogeneities, temporally and aesthetically. Through tapping into a repository where non-European expressions were highly developed, the festival circumstantially designed opportunities for artists to investigate shared roots of drama, music and performance. Specific performances such as the seminal work Orghast (produced in 1971 by directors Peter Brook, Arby Ovanessian, Andrei Serban, Geoffrey Reeves, poet Ted Hughes and dramaturg/linguist Mahin Tajaddod) are presented as veritable case studies of this focus on Artaudian ideals. For this site-specific commission, Tajaddod and Hughes invented a language (itself called Orghast) based on Middle Persian Avestan and ancient Greek. Incomprehensible to the modern audience, its primary intention was the omission of text as carrier of symbolic meaning. It was the Paris-based International Centre for Theatre Research’s first major research project, with performers hailing from Iran, Cameroon, England, France, Japan, Mali, Portugal, Spain, and the United States.

Photographs and videos present vivid documentation of other performances. Especially striking are those of productions by a new post-colonial generation of African dramatists, who drew upon indigenous traditions and mythologies. The Ballet National du Sénégal participated with traditional dances and music in the 4th Festival in 1970, followed by Ensemble Lyrique du Sénégal in 1976. Duro Lapido’s famous opera Oba Ko So - a dramatisation of the Yoruba story of Shango the King of Thunder - was staged in 1973. With the inclusion of these artists, the Festival implicitly entered into an intercultural dialogue with contemporaneous African platforms, most notably the World Festival of Negro Arts in Dakar (1966) and the Pan-African Cultural Festival in Algiers (1969). Yet the regional, or ethnographic nature and purposes of these appear to contrast with the inclusive, panoramic view of world culture as it was articulated at Shiraz-Persepolis. In contrast, the Festival had set out to provide opportunities for a juxtapositional complimentarity between cultures - a utopian unity of disunities.

This wide-ranging audio and visual display highlights the establishment of Shiraz-Persepolis, by the early 70s, as a crucial player in a complex network of creative expression. Beyond the North- South confrontation, and its own alignment with the Non-Aligned Movement, it also negotiated ideological and political Cold War demarcations, facilitating the exchange of information beyond the Iron Curtain. Notably, in the case of Poland, Shiraz-Persepolis provided an important platform for exposure. Jerzy Grotowski in particular left an indelible mark on the contemporary theatrical language of Iran. From Japan came a dramaturgical revolt in the works of Shuji Terayama and the Tenjo Sajiki Theatre Laboratory. The 1972 Festival brought three important Western experimental practitioners into proximity with Asian traditions to which they were indebted. John Cage had studied with Daisetz Teitaro Suzuki, a theologian of Zen Buddhism. With Merce Cunningham they drew inspiration from I Ching (Book of Chances) to explore notions of chance and indeterminacy, whilst Karlheinz Stockhausen’s compositions aimed at reaching a state of inner ascetism and spirituality correlating with philosophies of Hinduism.

The archaeological research underlying the display at Bergen points towards the curatorial direction of the festival itself, which underscored a reverse transmission of knowledge, from the so-called periphery to the centre. This simultaneously fuelled innovation locally and introduced a new wave of Iranian artists to international networks.

Through attending to the actual agendas and artistic content of the festival - the product of long-term and continuous research into publications produced in association with this decade-long event, discussions with still-living audience members, artists and directors, and the (limited) currently accessible archival visual, audio and filmic material – the display at Bergen elegantly bypasses the unwarranted demonisation, the mythological façade under which the festival has heretofore been buried. Instead, AOTFD presents a fascinating look at the artistically sophisticated, yet profoundly innovative, contested space within the festival itself – its artistic content – rather than the contested space which surrounded and continues to surround the festival, and has served to transmogrify it into an historical blind spot.

The exhibition’s chronological presentation ends with documentation of a performance on 25th August 1977 by the Tala’i Ensemble, linked to the Centre for The Preservation and Propagation of Traditional Iranian Music. This was to be the final performance before the permanent closure of the festival. After a religious decree was issued in 1978 declaring it culturally decadent and un-Islamic, the directors decided against staging the 12th edition due to the potential security risks involved. All materials associated with the festival remain inaccessible to the public to date. Yet from our perspective now, this archive forms a crucial source of unexplored and latent creative potentialities. With the planned opening of TMoCA’s collection - for the most part similarly withdrawn from the public eye post-1979 - to an international audience in Berlin in 2017, AOTFD takes an opportune moment to integrate this aesthetically and intellectually important project back into art historical discourse.

A Utopian Stage is a project of Archaeology of the Final Decade, a curatorial think tank founded in 2010, which researches histories of nations condemned by social displacement, cultural annihilation or deliberate disappearance. AOTFD engages with accounts of culture, which have been lost through material destruction, political, economic or human contingencies. The research identifies, investigates and re-circulates significant cultural and artistic materials that have remained obscure, under-exposed, endangered, removed or in some instances destroyed. 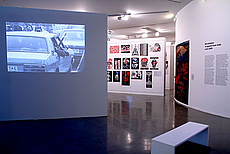