In the Performing of ‘Self’ and ‘Other’

In the Performing of ‘Self’ and ‘Other’. Rezension ihrer Ausstellung: Alles, was man besitzt, besitzt auch uns. Haus am Waldsee, Berlin, 7. Juni - 16. August 2015 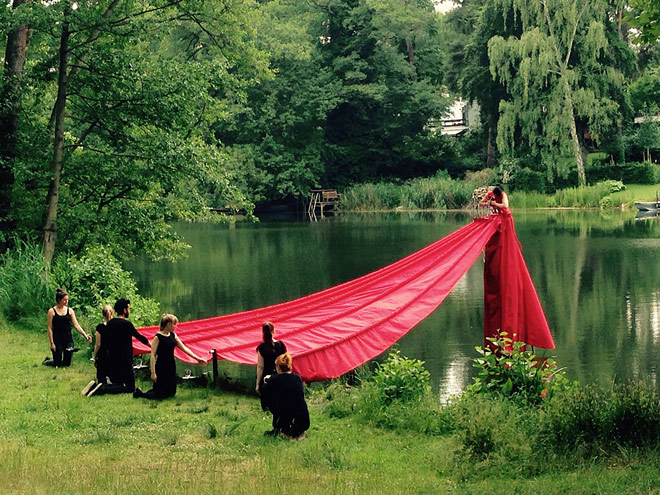 While the Nezaket Ekici exhibition is no longer a ‘live’ performance, it continues to emit through crafted videos and performance documentation a highly expressive and ‘living’ manifestation. The viewer quickly discovers that the performances of Nezaket Ekici have a vital and energetic paradox of absent presence. [1] In fact, her former physical presence in material terms permeates almost every aspect of the unfolding Haus am Waldsee exhibition. Whether speaking of the personalised room environment called Emotion in Motion, where Ekici lipstick-kissed every object and the walls of the room, the emphasis from the outset engages with the site-specific domestic and historical nature of the Haus am Waldsee itself.

The first room of Family Portraits is a personal family and relationship history, installed in a scattered configuration on a richly painted turquoise ground. Thereafter, and by extension, the relation of ‘self’ to ‘other’ increasingly takes place, as seen in the opening performance 99 Commandments, which initiated an engagement with issues of gender, customs (religious or secular) and social taboos. Whether dealing with the relations of Islam-Christianity-Judaism, the issues are expressed not as an explicit critique but as an assertive revealing of the exegetical paradoxes in the so-called threefold religion(s). The performances raise questions rather than making any definitive final judgements.

While frequently dealing with food customs, there are a series of video monitor presentations like Flesh (No Pig but Pork) , or Salt Dinner of 2011 and 2012. In the former she used pig meat to challenge conventional religious-ethnic taboos, while the latter is a shared performance with the Israeli performance artist and filmmaker Shahar Markus. The performance, enacted by the two artists quite literally while positioned at a banquet table in the Dead Sea, sees the two consume a symbolic dinner —perhaps, an ironic take on The Wedding Feast at Cana—, clearly connoting the religious status and power of salt and its essential relationship to the sustaining of human life. Such works as Balance (2012) that uses daily staples like suspended bread for the audience to consume, and where the artist encased in butter becomes the butter source that is used to spread onto the bread, or Imagine, a semi-dance performance piece, using five hundred string-suspended apples, further the sensory food-related investigations begun by Ekici some years earlier in 5 Senses…Food Collection (2008).

Food and drink often denote the immediacy of cultural stereotypes and the domestic in terms of conventional gender socialisation, as in the wall work called Lifting a Secret which deals specifically with her own Turkish past and the nature of family arranged marriages. Where suitors attend a coffee session at the request of the parents to be assessed for their suitability —often without consultation with their actual daughter as future bride. In this way, serious issues from gender-related to ethnicity are foregrounded, as with the artist’s unique use of location and dress apparel linked to a sense of symbolisation that has become essential to Nezaket Ekici’s performance strategies. Whether speaking of the extended performances associated with symbolic libations as in Water to Water (2015) on the lake at the Haus, or the pedestal-posed plate-smashing Porcelain (2015), there is a sense of intended theatricality. An example is Wirbelrausch (2015), where the artist appropriates the tradition of performance from the ‘Whirling Dervish’, displacing male conventions and feminising them by using wind machines and an accompanying flurry of rose petals. [2]
At the same time there is the questioning of transgression that challenges many archaic male-to-female stereotypes, as in the performance piece called Living Ornament-Carpet Object (2015), where a collaged wall hanging-cum-carpet image of the artist purportedly sleeping in the semi-foetal position, while swathed in a bed sheet, has been developed from an earlier performance. This shows Ekici’s plaited hair and pejorative ‘love apples’ (common tomatoes) attached as hair pendants. The role played by carpets is self-evident to her Turkish background and to the religious prayer structure of Islam in general. Seen askance it can also be cited and related to the artist’s use of strategic provocation, her recent Dresden project, where her public work installation called Post-It was placed in front of the State Court Building in the city. It represented an arch of entry made up of Turkish-Persian carpets as a generic —today they are produced almost everywhere in the world— that spoke to contemporary political tolerance and issues of multicultural inclusion. Not surprisingly the carpets were quickly despoiled by the intervention of local racist graffitist. Similarly, displacement linked to cultural transgression is found in Living Room, where bathing facilities are set up in a woodland setting and men, women and children (the family) bathe in open domestic baths. The reference to the family can also be linked (if indirectly) to those projects that were specifically conceived and included through social interaction with some of the local Haus am Waldsee community.

However, Nezaket Ekici’s performances must be understood in terms of her physical, emotional, and intellectually transmittable contents. And I have, perhaps, at times undercut the sheer physical dangers and demanding (sometimes risky) aspects of her participation in the performances. And they can be dangerous indeed if we go by the recent Ekici/Marcus performance called Field of Breath (2015), that took place at DNA Galerie, Berlin, where the two artists were buried under a bed of coal and were almost crushed alive by its weight. Such arduousness is evident in the final work of the Haus am Waldsee exhibition, called But All That Glitters is Not Gold (2015). The artist is physically locked in a golden birdcage with little space for physical mobility. While outside the cage gold keys hand suspended just out of reach, one of which unlocks the cage. The artist through twisting and at times painful contortions reaches out to try each of the keys in turn, but only after numerous attempts does she find the key to her liberation and escape from the cage. The image plays with patriarchal and cultural stereotypes of the social caging and the roles that are imposed on women. Yet setting apart the numerous literary and musical hall tropes associated with the ‘gilded cage’, what is more important is the fact that the artist critiques the illusions of materialism and more importantly asserts that women will claim their complete liberation and personal freedom. To the extent that Nezaket Ekici might be considered as a feminist artist, it is represented by her personal pursuit of the autonomy of self, that in turn forms the grounds for an egalitarian engagement with the alterity of otherness — her unique sense of the me that is not me.