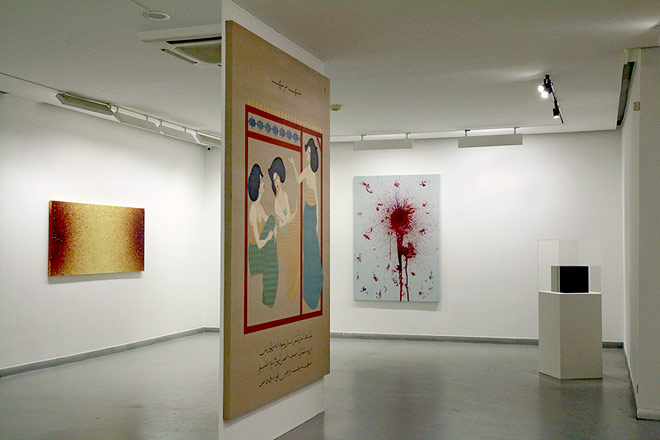 Taking its cue from the art of Islamic miniatures, Minor Heroisms brings together newly commissioned work by an impressive roster of international artists who lend this centuries-old practice an urgent and timely interpretation. Neither small in ambition nor necessarily in size, the works range from the intimate to the political.

From life in the Mughal and Ottoman courts to Persian mythology, miniatures usually depicted the life of rulers, heroic battles, epic stories and magic worlds. Big stories, for big characters, told small. In Minor Heroisms both scale and the idea of the heroic are flipped and expanded. The works locate the heroic within small everyday struggles and instances of resistance that make up the larger socio-political fabric. This contemporary heroism is modest, often undetectable and does not always make the news headlines, for it goes against the grain of how our vision is conditioned and framed. It can be depicted larger-than-life or very small size; it can draw on the real or on the imaginary. This ‘minor heroism’ creates its own – twisted – poetics that comments, at times softly, at times loudly, on a state of affairs in the world. This state of affairs comprises politics, history, memory, but also more personal issues such as physical and spiritual love, faith and devotion.

The works in Minor Heroisms create their own imaginary where, more often than not, beauty, violence and struggle meet tradition and the present in a distorted reality that is compellingly seductive, as much as it is ominous and estranging.

Pakistani artists Imran Qureshi and Aisha Khalid, both alumni from Lahore’s National College of Art’s Miniature Department, and prominent masters of the new miniature, offer works that continue their critical expansions of traditional techniques into a contemporary vocabulary. Qureshi’s acrylic on gold leaf canvases explode floral patterns onto the paintings’ surfaces, creating a medley of beauty and destruction. Khalid continues her investigation of spirituality through three-dimensional objects and abstraction.

Dutch artist Femmy Otten tells a dreamy love story in the site-specific recreation of her 2011 installation New Myth for New Family that is influenced by classic Italian portraiture and Persian miniatures.

Also taking her inspiration from Persian miniatures, as well as Ottoman vases, Turkish artist Burçak Bingöl brings together a scene from a 17th Century Persian miniature with the recent political events in Gezi Park in her piece Unforeseen Resistance.

Commentary on Turkey’s volatile political situation is further provided by Extrastruggle, who has rendered a well-known foul-mouthed political comment in beautiful çintemani motifs.

Azade Köker has borrowed from Ottoman miniaturist Hafız Efendi to portray the eternal tension between good and evil in her mixed media work. Iraqi-American artist Hayv Kahraman in her painting Hameeha Harameeha, combines influences from the 12th Century Baghdadi illuminated manuscript Maqamat al Hariri with her own lived experience as an Iraqi refugee.