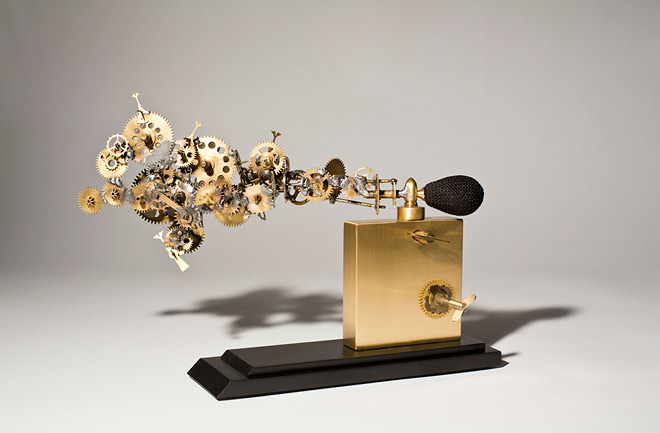 Memed Erdener, an artist based in Istanbul, first began his multifaceted project, "Extrastruggle," in 1997. As he writes in his manifesto, Extrastruggle is a fictional graphic design firm that creates "logos for all communities under social pressure... The veiled girl not allowed into the university, the man who is frowned upon for speaking Kurdish in public."

Extrastruggle is a movement of culture jamming and artistic intervention. Erdener carried out his interventions against hegemonic visuals/images and entered them into alternative combinations. In this manner, Extrastruggle became a political and artistic performer. In doing all this, his depersonalized political engagement rendered his own status and person invisible. This was also perhaps why Extrastruggle was often erroneously thought to be a "group" project.

The artist uses simple, efficient materials. Erdener’s imagery evokes how-to-become-a-citizen manuals, as well as popular and populist graphics that appear in magazines, the corporate branding of public companies and political parties, and street signs. He infuses his work with the style of political cartoons. The imagery represents "the never-ending struggle between photograph, form, sign and script." Erden Kosova writes, "When brought together, (Erdener’s) disparate and sometimes contradicting figures start to play against each other and produce a third semantic field that constitutes the ironic critically in Extrastruggle’s works. The irony in them aims to displace discourses of various political orthodoxies."

Extrastruggle builds relationships between the titles of the works and the imagery that he represents, both as objects and on paper. Each work is both a story and a critique, not dissimilar to ubiquitous political and corporate visual language that permeates our lives.

Extrastruggle is hyper-aware of the modes of exhibition, through works such as Slavery Museum and 1915, in which he acknowledges the dubious circumstances of how museums acquire the objects. The Truth and the Public reads as a translation of Greek tragedies for the post-modern man, while Black Man takes on sinister connotations in the different meanings of "black" that it addresses. Acknowledging the relationship between spirituality and violence, Spirit and Matter is a proposal of reconciliation of this binary.

Extrastruggle’s objects can be interpreted as religions that never were and flags of countries that never will be.

Extrastruggle first emerged in 1997 as a movement of culture jamming / artistic intervention, and until now, mostly produced extrovert works with highly distinct references and points of attack, works that could be deemed propagandist. As befits its name, this was a project of 'struggle'; a struggle of discourse (and yes, Foucauldian) against the morbid discourses that formed the establishment of the Republic of Turkey (Turkiye Cumhuriyeti, TC). In works he presented on his web site and at his first solo exhibition (I Didn't Do This, You Did) he carried out interventions against current hegemonic visuals/images and entered them into alternative semantic combinations; as in the The Mausoleum of Mustafa Kemal, featuring minarets added to Anıtkabir, the mausoleum of Mustafa Kemal, the founder and first President of the Republic of Turkey, or in Heart Wound, an inverted version of the flag of the Republic of Turkey, made of flesh, fat and bones. These works were in constant struggle with state ideology, and often with the holy taboo of Kemalism. Extrastruggle also produced works that commented on 'New Republicanism', a political movement aiming to take the place of Kemalism. In this manner, with artistic interventions made using the narratives, symbols and myths of the nation's history and current agenda, Extrastruggle became a fully flourished political and artistic performer. In doing all this, his detached, depersonalized political engagement rendered his own status and person invisible. This was also perhaps why Extrastruggle was often erroneously though to be a 'group' project.

However, in his second solo exhibition titled There Is No God in the Sky Only Birds a personal aspect which did not exist before has emerged. Memed Erdener, having defined himself via a 'negation' of power in his previous works, now creates a unique position (a position that does not feel content in being only the Other of power). A voice concerned about what it is is added to a voice that declares what it is not. Stating that he again has a problem with authority and the state, he declares that the struggle must move on from the extra (the outside) to the intra (the inside), adding a more metaphysical, more sufist strand to actual politics. And this is how he explains this move: To bring together Orwell and Fuzûlî [1]. Having only produced Orwellian works (like a modernist writer, who perhaps produced a little more monolithic works, focusing on grand symbols and myths) previously, he now approaches a more 'hybrid' position, producing more multilayered works both in terms of the use of materials and conceptual content.

While his previous works only focused on the codes of 'civilisation' and power, and the collective, his new works add nature, Sufism and personal existence to the equation. In other words, while his works previously engaged only with 'the external world', they now take 'the internal world' into consideration, too. Thus, Orwell, the man of the industrial Western city, converges with Fuzûlî, the man of Eastern deserts. 'Major' topics such as nation, identity, history, memory, power and hegemony, which occupied the centre of previous works, also form the frame of this new exhibition. However, here there is a strand that makes us feel that the political and the collective cannot be held separate from personal micro-strands, and that the events that take place in the political sphere, first and foremost occur within the internal structure of the individual. This new composition is completed with the addition of a regard that has turned its gaze to the greater landscape beyond the socio-political context, to the cosmos, and which questions, not only the power of the state, but the greatest of powers, the construct of God.
…
The work titled Revolution (2014, see image 13) proposes a different interpretation to the problem of "revolution" that has often been subdued by being substituted with the Ottoman word "inkılâp". Below the work composed of an old bayonet and a crochet coverlet there is a quote from a text on Deleuze and Guattari. This quote from the field of radical political theory placed below the work recalling the period of the 'War of Independence' opens an entirely different window. This quote, stating that revolution is not a matter of destroying old internal conventions but occurs through making additions to the current system, also explains the tragedy created by the absolute rupture the Republic of Turkey placed between itself and the history and tradition that came before it. What counts is not creating one's own hegemony through large-scale political interventions, but to constantly carry out interventions that will shatter hegemonic structures. The exhibition occupies a strong political position because it makes the viewer feel this. And what's more, this new whole which Extrastruggle attains by adding the intra next to the extra, manages to shed the unidirectionality of the extroversive proposition "You Did This" which frankly is not very persuasive in the art of culture jamming / intervention. We are now looking at a much more comprehensive Extrastruggle.