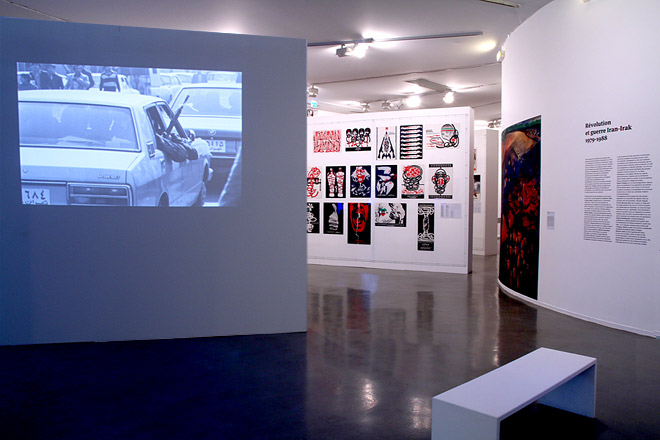 This sequence illustrates the diversity of images produced during the Revolution. The idea here is not to make the Revolution the central point of study or to isolate it from the rest of history, but to take a perspective before and after in order to recreate the historical cross-fertilisation between painting, graphic art, cinema and documentary work. Unprecedented mobilisation of people and new ways of occupying public spaces gathered momentum along with the protests and the demonstrations. Eight years of fighting and deaths in a war about which, even now, relatively little is known left a legacy of bitter controversy. Throughout this period the unofficial archives of the Revolution and of the Iran-Iraq war accumulated in stark opposition to the official, national line.

Bahman Jalali (1944 - 2010) and Rana Javadi's (* 1953) photographs, which were taken between 10 December 1978 and 11 February 1979, were published in the book and manifesto Days of Blood, Days of Fire. They are a record of events leading up to the overthrow of the Shah. Since the 3rd edition of the book was censored in 1978, the pictures have rarely been displayed. They are presented here as a slideshow. Kamran Shirdel (* 1939), was one of the most heavily censored documentarists of the Pahlavi era. His films have often been rediscovered long afterwards. Here he presents, for the first time, the unedited rushes of footage that he shot at key places and key moments of the Revolution. Renamed Memories of Destruction, this unique document is a subjective view of the uninterrupted flow of images that surrounded him.

In similar fashion, Bahman Kiarostami (* 1978) is reactivating a memorable archive with the video Flowers. These were the first pictures to be shown on Iranian National Radio-Television after the insurgents had invaded the broadcasting headquarters.

The various sets of posters from the Revolution and the Iran-Iraq war on display represent a confrontation of political forces and social groups of all kinds. They are evidence of the role of students and the universities and were used on a massive scale by the Marxist revolutionaries before becoming a tool for propaganda and national identity. The opinions expressed on them are sometimes attributed (e.g. to student groups or the Shishegam brothers) and sometimes anonymous. Their inspiration came from revolutions in other parts of the world and from important local political and religious figures.

Kazem Chalipa (* 1957) was one of the major protagonists in the formation of a generation of 'revolutionary' painters. His work is a complex mix of 19th century modern painting and revolutionary and religious symbols. The Iran-Iraq war was also recorded from a variety of standpoints. In his first documentary series, Haqiqat (Truth) , Morteza Avini (1947 - 1993) uses a handheld camera and off-screen voices. He shows us long interviews with soldiers speaking from the trenches - men 'disinherited' by the Revolution, prepared to sacrifice their lives. Avini's personality and voice, as editor and narrator, are omnipresent in his films. His style influenced a whole generation.

Jassem Ghazbanpour (* 1963) has assembled an archive of thousands of images, of which only those devoted to certain episodes in the war are represented here: the bombing of Tehran during the 'war of the cities' and the chemical weapons massacres in the Kurdish town of Halabja.

Bahman Jalali regularly visited the combat zones in and around the city of Khorramshahr where he systematically recorded the gradual destruction of the town. He also reported from the battlefields, photographing the soldiers - their life and their death.