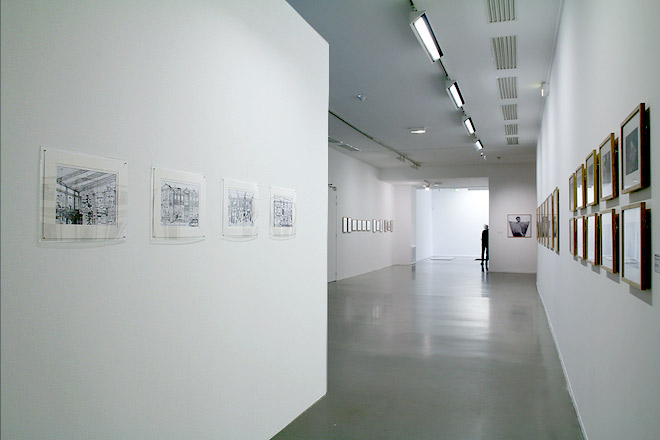 A generation of young artists, who reacted to the Revolution by going abroad (particularly to France), experimented with different media and approaches from those taught in Iran up to the 1980s. Their works became increasingly adapted to the norms of the international market - which was also a reflection of the local environment and urban space, both transformed by the capitalist economy.

Nevertheless, a new generation of photographers (all students of Bahman Jalali) remains faithful to tradition and the ethics of documentary photography in their rejection of the fashionable practice of turning photos into aesthetic objects.

Mazdak Ayari, has been recording private moments in the life of his family and close friends for more than ten years. This extraordinary photographic diary has never been exhibited before. It is screened here as a slideshow. Behzad Jaez's photographs, taken in religious schools in Tehran and Qom in the early 2000s, recreate in their strange way the day-to-day life and activities of students from different generations and social backgrounds. Tahmineh Monzavi is interested in unconventional characters and various forms of social exclusion. On display here is a series of photographs about Tina, a transvestite who lives in a refuge for people in difficulty, and a set of pictures taken in a garment workshop where young men make wedding dresses.

The realism of Mitra Farahani's drawings reveals an affinity with documentary work. She explores the boundary between still photography and the moving picture by moving the face of Goliath in the Caravaggio painting at the Villa Borghese, Rome, thus questioning our collective representations of David and Goliath.

Chohreh Feyzdjou who died young, produced installations and assemblages of objects and complex materials (e.g. vegetable fibres, crushed walnut husks and rolls of her own canvases overpainted in black). They are both an ironic comment on the merchandising of art and an elegiac meditation on the passage of time. Under the title Office of Investigation into Diverted Trajectories, a cross-disciplinary work, Narmine Sadeg offers us a reinterpretation of the elements of the folk tale The Parliament of Fowls by 12th century Iranian poet Farid al-Din Attar. She invites each spectator to use this investigation in order to work out who are the real losers in the tale.

Mohsen Rastani's photo series Iranian Family is a documentary of post-war society in a portrait typology representing the various groups of Iranian society in all its cultural diversity.
Barbad Golshiri, in a tribute to the artist Chohreh Feyzdjou, has constructed a tomb in the form of a sarcophagus placed over the unadorned site of her grave in the Cemetery at Pantin. The stencilled tomb presented in the exhibition evokes the anonymous graves of the martyrs, who were forbidden any inscription by the regime.

Arash Hanaei creates digital drawings using photographs of Tehran and erasing parts. By isolating them, he highlights significant details of social and urban change. He draws our attention to unexpected similarities between the murals of the martyrs and advertising hoardings. The link between city and memory is also present in the work Khosrow Khorshidi has done over the last few years. The drawings recreate the monuments and atmosphere of 1930s and 1940s Tehran - now vanished.