Yogyakarta Biennale Foundation proudly announces its new direction and curatorial team for the next edition, Biennale Equator #3 in 2015.

Begun in 2011 and finishing in 2020, Biennale Jogja has transformed into the Biennale Equator, departing from the idea of tracing and responding to a history of globalism and the relationships of people and States, in the constellation of the international art world. While the concept of mobility and the extension of various expression of art forms and ideas have been more visible in the last two decades, at the same time we notice the existence of a hierarchy in the art system of the so-called center and periphery. The idea of defining regionalism with a focus on the equatorial area is initiated as an intervention on this inequality.

After collaborating with India (2011) and Arab countries – Egypt, Saudi Arabia and the United Arab Emirates (2013), in 2015 Biennale Jogja will be working with Nigeria as its partner country. The selection of Nigeria emerged from a process of re-mapping Indonesian relationships with African countries, from the colonial period up to recent developments. Nigeria and Indonesia have developed diplomatic, trade and political relationships which reflect similarities and diversities in the context of culture and history. The Yogyakarta Biennale Foundation sees Nigeria as an entry point for dialogue with other African countries, particularly from West Africa.

We welcome Alia Swastika as the Director of the 13th Biennale Jogja, returning to us after her role as Co-curator for the 11th Edition with Suman Gopinath (India). Alia Swastika is a curator based in Yogyakarta, and has been working with the art scene in the city for almost 15 years. Aside from her projects in Indonesia, Alia Swastika has been involved in various international projects; as curator for Marker Focus on Indonesia, at Art Dubai 2012; co-Artistic Director of 9th Gwangju Biennale: Roundtable (with five other curators) and other projects. She is now a board member on the International Biennial Association representing Biennale Jogja.

From the curatorial team, the Artistic Director is Rain Rosidi, and the Curator is Woto Wibowo aka Wok The Rock. Rain Rosidi (born 1975) is an independent curator and lecturer at the Indonesian Institute of the Arts, Yogyakarta. He worked as curator for the alternative space Gelaran (2000). In 2003, he joined the arts management residency program at Queensland Art Gallery, Brisbane and at the Asia Australian Art Center (Gallery 4A), Australia. His curatorial works include Neo Iconoclast (2014), Future of Us (2012), Jogja Agro Pop (2011), Indonesian Disjunction (2009), Utopia Negativa (2008), Jawa Baru (2008) and others.

Woto Wibowo aka Wok the Rock (born 1975) is an artist interested in developing experiments in collective space, interdisciplinary work and contemporary culture interventions, using design aesthetic and speculative platforms in his artistic practice. He is now the Director of Ruang 56, an artist-run-space focusing on contemporary photography. 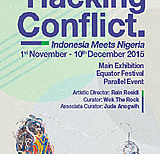 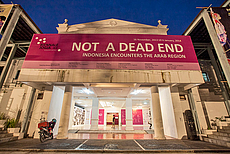 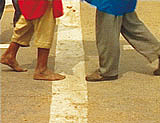 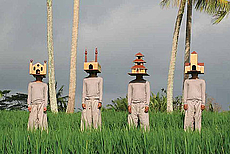