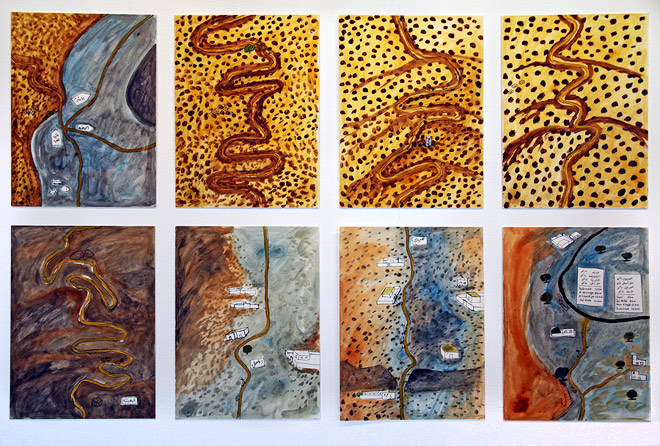 Camar Cande's Journey
2010 - 2011
Camar Cande's Journey chronicles a trek Abdullah Al Saadi took through the Northern region of the United Arab Emirates and Oman accompanied by his dog and donkey - which he named Camar Cande. During this trip, Al Saadi's relationship with his companions played a significant role in helping him visualise, chronicle and define his spiritual connection to the earth and its elements.

Al Saadi was inspired by the natural beauty of his surroundings and documents his experience with nature and landscapes through photographs, videos as well as watercolour paintings. The presence of his animals inspired the visual impressions of his surroundings with a kind of spirituality, that connected him to the land and its elements.

My Mother's Letters
1998 - 2013
Abdullah Al Saadi's mother visited him often in his studio, each time he was not there she would leave a personal momento to announce her presence.

Al Saadi's mother could neither read nor write, yet her letters to him were full of symbolism and coded communication. Using stone, metal, tree sprigs and other items depending on the message she wished to convey and sealed with her scent and fingerprint, the bond between mother and son deepened through this very private form of correspondence. Al Saadi once wrote "My mother may be illiterate ... but her messages are full of symbols, full of the magic of the ancient language of the Orient."

Since 1998 and throughout the years, the letters were organised and catalogued by the artist and formed the basis of his book titled My Mother's Letters. The latter contains diaries and drawings, as well as a detailed explanation about the daily items from his mother. These items were classified chronologically according to size, quantity and type. In addition to that, Al Saadi kept a record of the time and the purpose of her visits.

On 26 July, 2013, Abdullah Al Saadi's mother passed away. In the book, the artist states: "What my mother left to humanity is what should matter to any human being in terms of heritage or property; as it is a means of solid communication with the past based on cultural depth that is deeply rooted within history in all continents.

Stone Slippers (Al Zannoba)
2013
In the Stone Slippers (Al Zannoba) series, Al Saadi demonstrates the extreme difficulty of traversing harsh terrains of life by foot. Each of the 50 items from the series is sculpted from stone or rock. The irony of the presentation is readily apparent in that the slipper, as a specific type of footwear as used in Al Saadi's natural world is often associated with comfort, freedom and easy walking. By transforming them to these immobile objects they become fixed in I their permanent connection to the environment."

The Comparative Journey
2013
Abdullah Al Saadi has undertaken several journeys around the world to conduct ethnic, geographic and anthropologic comparisons and documentation nature's sites. He documents his experiences through various diaries, drawings and landscape paintings.

Following the artist's trip to Latin America, he makes comparisons between the Amazon River with the valley that traverses his own home, the river's fish with his homeland's local fish (Al Sadd), the Llama with a camel and the use of body inscriptions with Henna as seen in both cultures.

On the contemplative journey the artist spent along the northern and eastern region border areas of Oman and the United Arab Emirates, the artist retraced the Camar Cande's Journey he made in 2010. As his companions, Al Saadi took ten stones with animal figures engraved on each one, creating Ten Engraved Stones with Animal Figures (2013). This was a symbolic act meant to underscore the difficulty of bringing ten live animals on the journey, while being a tribute to his former companions.

As a continuation to The Comparative Journey series, Al Saadi created The Watermelon Series, a set of watercolour paintings of red mountains. Al Saadi was inspired when his son said that the watermelon slice he was eating looks like a mountain. From here he used his imagination to create a series of paintings that respond to the question of "Why can't mountains be red just like the watermelon?" 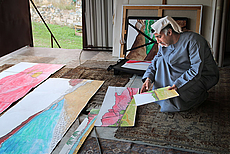