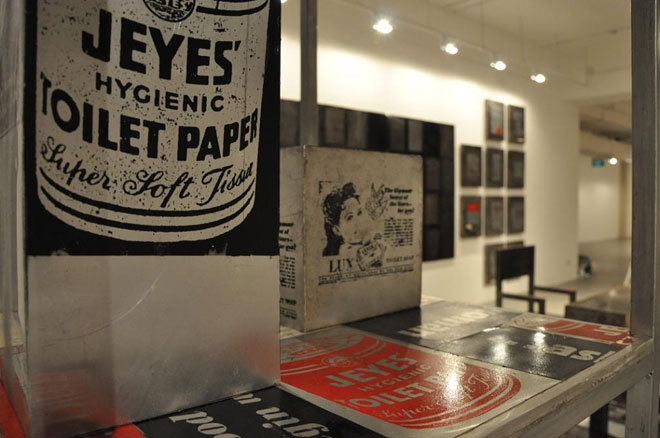 One of the difficulties with deploying archived figures as objects of ‘knowledge’ within a museum setting is that it reveals the difficult rules of a curatorial practice, which enables particular statements to survive and undergo transformation. These figurations, lodged between the language that constructs and deploys sentences, and the accumulations that non-passively amass words that were once spoken, emerge as a distinct level in contemporary practice, which may or may not inhibit the deployment of countless potentials at regularized moments of a gallery or museological encounter. As such, the setting of the museum gallery may be assumed to be a fertile scape if deployed reflexively, outside time and place, welcoming and inhibiting tradition, potentiating oblivion and freedom, layered by artistic and curatorial performances. Whether or not one finds these epistemological categories useful, it does help to demonstrate the intersections between the technical and cultural strategies and tactics.

The springboard for Writing Power was formed by various questions surrounding the relationship between art and power. To be explored in cooperation with influential Malaysian artist Zulkifli Yusoff, the project was perched as an enquiry into the development of conceptual and installation art in Malaysia since the 1980s. The questions we posed were: instead of seeing on great mythical books lines of words that translate into particular characters that were formed in another time and place, could we, in the density of our practices, establish statements as events with their own contemporary domains of appearance? Could we, almost contemptuously, ‘contemporarize’ documents and traces, without falling prey to the insensible colonization of the present by what Fredric Jameson call "the nostalgic mode"? In the postcolonial space that is the museum, can pax Britannica, in its literary grandeurs, and in the same manner as it has been the focus of much historical and literary criticism, be made an emergent site for contemporary art practice to freely engage with what was, in the not too distant past, ‘Colonial Malaya’?

Assembling two installations by Zulkifli Yusoff, which he had completed almost two decades apart, namely Pelayaran Munsyi Abdullah, (2003, Aliya and Farouk Khan Collection) and Power 1, (1991, Singapore Art Museum Collection), Writing Power (re)staged and simultaneously unpacked the conceptual grounds and the workings that informed the artist’s practice. Once restated as a contemporary encounter, colonial and native texts were also introduced to offer fresh lines of enquiry, contextual re-positionings and anecdotal links, alluding to the dynamic role of reading and its potentials. The hope was to call out to our audiences: if it matters not-knowing what these traces mean, who made them, when and why, where do we place them, or how to approach them, in the now.

Making reference to the artist’s methods, Writing Power mobilized the colonial archive as a potent site for creative encounters, with a steady juxtaposition between texts, icons and the two artworks. As an artist-curatorial collaboration, the show demonstrated to visitors the building blocks that go into the themes conceived by the artist. Often materials were arranged in an assemblage of citation and juxtaposition, presented as archival scaffolds, Writing Power drew on three texts which were mobilized by Zulkifli Yusoff for his installations since the 1990s. Namely, The Story of Abdullah’s Voyage to Kelantan (Pengajian Kesah Pelayaran Abdullah Munshi, c. 1838) which remains a crucial reference for the study of modern Malay literature, the Malay Annals (Sejarah Melayu, c. 16th century) which locates the genealogy of the Malay Sultanates of the Malaccan Empire, and the Malay Sketches (c. 1895) penned by the first Resident General of the Federated Malay States, Sir Frank Swettenham, which provides glimpses into his interactions with and regard for the communities of the region.

As an artist, Zulkifli constantly melds critical and historical perspectives with newer formal approaches. In relation to his artwork Pelayaran Munsyi Abdullah (2003), Zulkifli reflected, "I needed to look into the fundamentals, in this case, the structure, the planes, the angles, the trajectories, the lines, shapes, forms, textures, the directions, movements, flow. I needed to come up with my own ‘hukum’ or ‘order’ so-to-speak, and even at times break from it." Combining literary passages, facsimiled pages from historical texts, and images from old newspapers and adverts alongside the artist’s installations, the exhibition was curated to provide an insight into the artist’s approaches in installation making. The eccentric array was crucial to get beyond the surface, to allow newer readings of familiar things to emerge.

Although the citationary locus developed for the project, as one between artwork and archival traces, frustrated the audience at times, we encouraged our viewers to persevere. Each step forming an attempt in better understanding the gap of our own discursive practices – i.e. artistic and curatorial method of operation and questioning. Alluding to not one but many notions of power, and almost, as if, echoing Foucault, deploying integral points of the strategy across the gallery surface that underlie and permeate discourses that make up our everyday being as culture workers – allowing the audience to simultaneously acknowledge and subvert boundaries and in-turn flaunt this conspicuous distancing in a way that can be experienced by others.

The museum gallery, then, surmised as the site that rests between what one says and what one may not, the challenge of Writing Power, it emerged, was not about how to present colonial knowledge in a museum setting, but to consider how those who were silenced remain distributed in museological contexts as contemporary artworks are mobilized. Which types of discourses remain authorized, or which forms of discretions acknowledged. For this, the deployed textual and visual traces which had encouraged an ephemeral distancing with the literary text, an often undefined experience – had allowed the balance between strategies of announcement and ‘clandestine curatorial interventions’ to unfold as Zulkifli’s prolific artworks were encountered. This is probably as close as we can get to what Frantz Fanon means when he says that memory needs to be re-cast as a zone of cultural instability – perhaps the clinical space of the museum is the most ideal for such a project...