The Aftermath of the Image-Production Revolution in Post-Revolution Iran 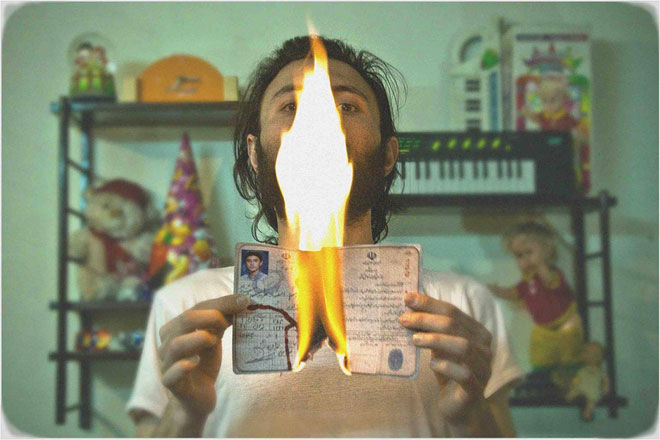 Mohammad Hossein Zarqam, a young Iranian artist, burned his birth certificate in front of a camera. The photograph appeared online, was admired by 117 other people of his generation, and was finally sold to another young artist for less than a 100 Euros. It would cost him much more and would take him months to get a second copy of the birth certificate if he intends to do so. Meanwhile, he will not exist officially. But people like him do not officially exist anyway.

Iranian art today is rarely addressed from a visual cultures point of view. When it is, it is seen not as a part of a larger system of image production, but rather simply in opposition to it, as a grappling with censorship defined as a ban on representation of certain topics. As such, Iranian contemporary art is regarded as the expression of Iranians when they speak out using the free margins to express what is conceived of in the freedom of a vacuum. It is also considered as being closely connected or trying to connect to the international art scene. Such formulation also conforms to the image of the country and the expectations of the outsiders. It fits the function of this art within global visual culture. But this art functions quite differently within national borders; it is actually a different notion of art. This accounts for the charge of "self-exoticism" being so strongly leveled against artists who, by choosing a different audience, try to shift between these two functions. It is nearly seen as an act of betrayal.

"Why frown upon self-exoticism if it provides the exotic a chance to be seen? What other way is there to attract the attention of the outsider?" Thus reply those accused of self-exoticism. And they are right. Those of us who have tried to address a foreign audience, through words or images, have felt the pressure. How can you address those whom you have gathered based on an interest on their part in something different from what you are about to express? Ironically, attracting attention—that very essence of contemporary art—through a local gesture fits well in the governmental image-production system.

While exoticism points to differences, self-exoticism affirms this act. The exotic is measured in relation to the destination culture and as such does not simply translate a text but speaks on behalf of it. It takes side with the audience. That is why it appears as an act of betrayal.

We art historians run the same risk when speaking about Iranian contemporary art: the risk of officially denying the existence of those who officially do not exist. We speak on their behalf, framing them in terms of our audience’s discourse. That is probably why we prepare different sets of texts, with the best of intentions, for different types of audience and are reluctant to translate any of them. We try to show how progressive Iranian art is in addressing issues that matter—but to whom?

An example can make this clearer: Photo No. 2 appeared online in 2008 and was distributed widely through emails and weblogs. The girls must have grown up by now. The signpost reads, "My sister! Your hijab is protection not limitation." The message of the photograph is clear. It elicits admiration as an act of resistance when shown abroad. Yet, suddenly reminded of the fragility of such a moment, which has to close after the photography is taken, a local viewer would feel a great sense of regret. In comparison, the third photograph by Hoda Rostami appears romantic and probably not as powerful. It is framed as art but depicts a real scene and no longer stages an act of resistance. Precautions are taken, yet it manages to directly target the same feeling of sorrow. If you share the lived experience behind it, for you it would point to a contingency that neglects the existing power structure rather than recalling it. It says, "Yes, I’m faking it. But such a moment could have been enjoyed with such serenity in a world organized differently. So it is possible." This is impressive once you consider the system of image production that it is working with and against, a system that bans dreaming, the public space, and the possibility of sharing any image that can render any collective moment possible. Now, by pushing this to extremes you can easily make it function as an exotic object. A photograph by Hamed Safaee titled "Truth=Dream+Reality" does this neatly with a photo collage. Here, the performative function disappears and the claim is reduced to, "Look! This is simply impossible."

The Iranian visual art scene functions on the basis of motives other than surprising us: it still maintains the good old habit of asking why art should matter. To a great number of those whose names never appear in texts like this, art is not the pyramid topped by art auctions at the pinnacle. Their art is not produced for export, but rather consumed within the country. They do not fight against silence, but against a local terminology blocking the enunciation of anything meaningful. The product of this might not necessarily be interesting for us unless we are interested in the unofficial history of those who do not officially exist.

To say this art is consumed within the country does not mean it differs in form from Western achievements. The fact that it is not different does not mean it plays a function similar to them. A different function does not imply it is unique or independent of a larger system of image production. It has developed at the core of such a system. There is a history of this symbiosis. One needs to write that history in order to allow it to speak for itself.

Iranian visual culture has become increasingly political in the past century. One might expect that the Iranian visual culture suffered in quantity from the takeover of a supposedly iconoclast ideology in 1979. Quite the opposite: the boom in image production was unparalleled. While the fervor of revolution sank, the quantity of production remained the same. The revolution’s programmeto construct a new social biosphere coincided with a boom in population. The result was a generation brought up in a cultural atmosphere never historically experienced before. This was boasted about publicly. The result was not unfulfilled dreams, but rather an obligation to dream in terms of a specific constructed reality.

The outside world was blocked away with a screen full of images. A sophisticated image translation machine was and still is at work. International movies could be watched on national television, but the films were translated into new narratives. The image produced of the world, of the society, and of citizens was and still is unbelievably phantasmagorical. The images of private life do not match what anybody has seen in private, and every possible effort is undertaken to make sure no image in the public realm communicates anything from one individual to another. However, it is ok if such communication happens in private. For the ban is not on the message, but on certain modes of thinking. This is a system that dissects thought and tears apart expression not only by removing words or images through their abundance, but also by destroying their reference points. One can form his own private image (scraps gathered from the public realm), but cannot make this private image public. What is actually eliminated from representation is any idea of a bigger image of the real. There is no other collective bond except the governmental.

Here everybody can dream, but only individually. An economy of pain replaces desire. An extremely rational system channels irrationality. Any wise man is convinced that constant fear and conservatism is not only the wisest, but also the most humane way to survive and treat others. Once an image enters this system of distribution and consumption, the performative function of the image is immediately removed or diverted. When it enters the international art scene, it is confronted with a system supporting the same dynamics.

Here a nation is in decay. A generation is destroyed on a daily routine. For thirty years they have not experienced a single dream come true. To advise others to maintain hope appears to them as an insult. The balance is tried and tested over and over again and the psychological cost of experimentation is intentionally set at such high levels that no sound mind would ever find it worthy of the risk. For those who do take the risk, every effort is undertaken to ensure that the result is not distributed. Separate images should not be put together, yet things are allowed to be divided infinitely.