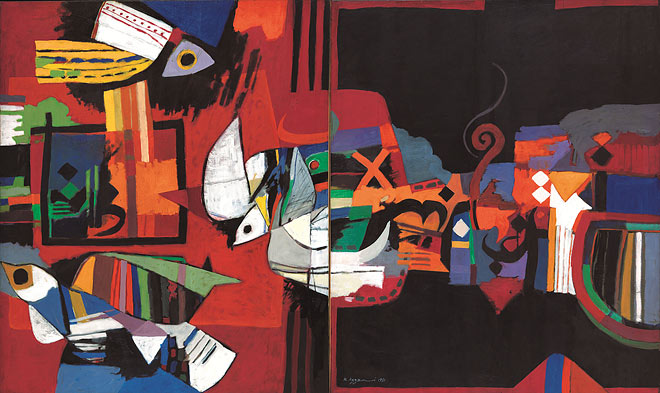 Pressemitteilung der Qatar Museums Authority,
veröffentlicht vor der Eröffnung 2010:
Conceived as a gathering place where questions are asked, ideas are explored and creativity is fostered, Mathaf: Arab Museum of Modern Art opened to the public on December 30, 2010, in Doha, Qatar.

In addition to the inaugural exhibition featuring works from the collection, Mathaf will present two special opening exhibitions in a new temporary exhibition space located on the grounds of the Museum of Islamic Art: Interventions and Told / Untold / Retold, which will be on view from December 30, 2010 to May 28, 2011.

Mathaf: Arab Museum of Modern Art is a new institution for Arab culture and creativity. Home to a unique permanent collection that offers a rare comprehensive overview of modern Arab art, Mathaf (which means "museum" in Arabic) will also perform an important role as a center for dialogue and scholarship and a resource for fostering creativity. The museum is located in a former school building in Doha’s Education City that has been transformed by architect Jean-François Bodin.

Under the leadership of His Highness the Emir, Sheikh Hamad Bin Khalifa Al-Thani, and led by its Chairperson, Her Excellency Sheikha Al Mayassa bint Hamad bin Khalifa Al-Thani, the Qatar Museums Authority (QMA) carries out a multi-faceted program that celebrates Qatari identity, builds understanding across borders and welcomes the world to Doha. In addition to Mathaf, QMA currently oversees the renowned Museum of Islamic Art designed by I.M. Pei (opened in 2008), the construction and development of the new National Museum of Qatar (designed by Jean Nouvel), archeological research projects throughout the nation, and the development of future projects.

About Qatar Foundation and Education City