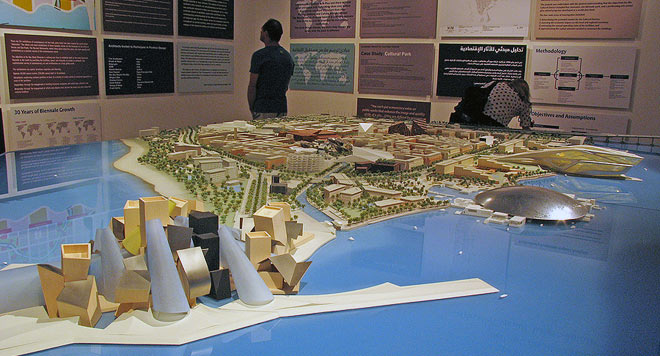 The information and photos on the Cultural District of Saadiyat Island and the planned cultural institutions published on these pages, are meant as a complement to the article Culture Boom in Abu Dhabi.

Photos and information ►
Abu Dhabi, the Cultural District on Saadiyat and the particular museums and institutions

Culture Boom in Abu Dhabi ►
Visions, skepticism, chances. Protagonists of the culture in the UAE about the planned museums.

Emirate of Abu Dhabi
The largest of the 7 United Arab Emirates.
Area: approximately 73,000 square kilometers, which is about 86% of the country’s total landmass, including 700 km of coastline and 200 offshore islands.
Population of Abu Dhabi = more than 1,3 million, expected to double in the next 10 years.
Abu Dhabi has 9,2 % of the world's proven oil reserves and 4 % of its proven gas reserves.
The island city of Abu Dhabi is the country’s capital and the seat of federal government.

Louvre Abu Dhabi
Universal art museum
Architect: Jean Nouvel
Total area: 24,000 sqm
Permanent collection: 6,000 sqm
Temporary exhibitions: 2,000 sqm
Key dates:
21 June 2005 - Sheikh Sultan bin Tahnoon Al Nahyan, Abu Dhabi Tourism Authority Chairman, visits the Louvre and expresses the wish of a partnership with the perspective of constructing a museum in Abu Dhabi.
6 March 2007 - signature of the agreement between the Government of the Republic of France and the Government of the United Arab Emirates.
The opening is expected to be in 2012.

About the concept of architect Jean Nouvel:
"We have covered it with a large dome, a form common to all civilizations. Made of a web of different patterns interlaced into a translucent ceiling, the dome lets a diffuse magical light enter the space in the tradition of great Arabian architecture." Quote from Ateliers Jean Nouvel.
Agreement with the Louvre:
Key aspects of the Agreement, signed on 6 March 2007 between the Government of the Republic of France and the Government of the United Arab Emirates.
The museum of Abu Dhabi is granted to use the name Louvre for the duration of the agreement, which is 30 years.
For 10 years up from the museum's opening it will present artworks from French collections, specially from the Louvre, of comparable quality of those in usual display, in form of rotating loans for a length between six months to two years. From 300 artworks at the beginning, the loans will be reduced to 250 after 4 years and to 200 after 7 years.
The agreement represents a sum in the order of 1 billion EUR over thirty years, from which 425 millions go to the Louvre (with 150 millions EUR right after the signature of the agreement), and 550 million EUR for the Agence France-Museums (for the mobilization of the artworks, and for temporary exhibitions). Abu Dhabi will reserve for the progressive constitution of the own collection an annual budget of 40 million EUR. Moreover, Abu Dhabi agreed to pay 25 million EUR as patronage of the Louvre to refurbish a wing of the Pavillon de Flore, which will then carry the name of a distinguished personality of the Emirates.
The opening of the galleries will take place in successive stages: 2,000 sqm at the museum's inauguration, increased to 4,000 sqm after the 4th year, and to 6,000 from the 7th year on.
The galleries of the museum will leave room for confrontations between artworks of different periods and geographical regions, emphasizing the dialogue between civilizations in the field of the arts. A small part will be devoted to contemporary art which will be presented in response to ancient artworks, to highlight the continuity between epochs and to show how the perspective on older artworks is ruled by contemporary perceptions.
The Museum will also include an auditorium, a center of pedagogic, scientific resources and research, education areas for adults and children, conservation and restoration studios, café and restaurant.

Key dates:
8 July 2006 - signature of a Memorandum of Understanding (MOU) between Abu Dhabi and the New York-based Guggenheim Foundation to establish a world-class museum devoted to modern and contemporary art, to be called the Guggenheim Abu Dhabi (GAD).
It is expected that the museum will be constructed within five years.
13 November 2007 - signature of a framework agreement between the Tourism Development & Investment Company (TDIC) and the Guggenheim Foundation.

The Guggenheim Abu Dhabi's collections and exhibitions will focus on modern and contemporary art since the Second World War. The museum will form its own major collection of contemporary art and will also exhibit masterworks from the Guggenheim Foundation’s global collections.
The museum will include galleries for permanent collections, galleries for special exhibitions, a Department of Architecture and Design, a Center for Art and Technology, children’s education facilities, archives, library and research centre and a state-of-the-art conservation laboratory.

Framework agreement, November 2007
between the Tourism Development & Investment Company (TDIC) and the Guggenheim Foundation, signed on 13 November 2007. Principal elements include:
- formation of a joint administrative and program entity to oversee the creation and management of the new museum;
- establishment of an Abu Dhabi museum staff projected at 250 to 300 persons, including UAE nationals;
- creation of mentorship and training programs of the UAE personnel as an integral feature of the museum and its mission;
- establishment of an acquisition and commissioning program to build a unique and extraordinary modern and contemporary art collection for the Guggenheim Abu Dhabi;
- formation of a special committee appointed by the government of Abu Dhabi to implement the collection acquisition and commissioning program jointly recommended by the Guggenheim and the museum operating body;
- development of a visionary special exhibitions program, including exhibitions developed specifically for and shown exclusively in Abu Dhabi and exhibitions of recognized masterpieces, as well as regional artists and trends;
- development and implementation of an educational program for UAE schools and universities;
- establishment of a Guggenheim Abu Dhabi Museum office in New York City, in quarters on Hudson Street.
(from a press release by the Guggenheim Foundation)

About the concept of architect Frank Gehry:
Inspired by the vernacular architecture of the Gulf region, dramatic conical forms animate the building by paying homage to indigenous wind towers (barjeel) that provide cooling. "In some cases, the conical shapes are used as entry pavilions: a main entrance to the museum, a boat entry to the museum, and then as walkways out into the desert landscape. The use of natural ventilation is inspired by its historical use in the region for many, many generations." Quote from Frank Gehry's design statement.

Biennale Park
Arrayed along a canal, there will be 19 pavilions designed by leading architects, varying in size and relationship to the surroundings and providing a platform for a diverse artistic program.

Besides an alternating art and architecture biennale programming, the pavilions could also play host to a broad range of events, from studios for visiting artists and architects to conferences and commercial art and design fairs.

The 62 meter high building with its organic design will have five theatres, a music hall, opera house, drama theatre and a flexible theatre with a combined seating capacity of 6,300. It will also house an Academy of Performing Arts.

About the concept of architect Zaha Hadid:
"The central axis of Abu Dhabi’s cultural district is a pedestrian corridor that stretches from the Sheikh Zayed National Museum toward the sea.(…) The sculptural form of the Performing Arts Centre emerges from this linear movement, gradually developing into a growing organism that sprouts a network of successive branches. As it winds through the site, the architecture increases in complexity, building up height and depth and achieving multiple summits in the bodies housing the performance spaces, which spring from the structure like fruits on a vine and face westward, toward the water." Quote from Zaha Hadid's design statement.

Maritime Museum
Architect: Tadao Ando
The museum consultant agency Lord Cultural Resources will be in charge of planning the content and operations matters.

About the concept of architect Tadao Ando:
The concept is inspired by Abu Dhabi’s natural surrounding, landscape and maritime traditions. Its ship-like interior with floating decks will guide visitors through the exhibition space.
"The elegant architecture begins with a unique space carved out of a simple volume that is shaped by the force and fluidity of Abu Dhabi’s wind. The solitary form stands like a gate over a vast water court, defining a space of encounter between two important landscape elements of the city’s culture: the land and the sea. With its reflective surface, the water court visually merges site and sea, reinforcing the maritime theme of the museum." Quote from Tadao Ando's design statement

Sheikh Zayed National Museum
Architect: Foster + Partners Ltd
The museum will honor the late Ruler of Abu Dhabi and UAE President, His Highness Sheikh Zayed Bin Sultan Al Nahyan – a man who played a leading role in the formation of the United Arab Emirates’ Federation and who has become affectionately known throughout the country as ‘The Father of The Nation.’