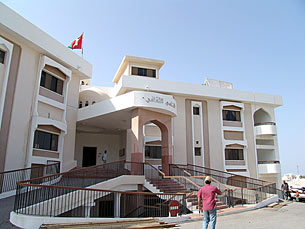 A closed little world, like a dot, is soon transformed into circle that move in a mysterious haze. You depart from the circle of your motherly womb into the circle of earth. Who has taken you to this obscure world? Where is Fate taking you? Why did you come? What do you want?

Once you leave a circle you get into another circle and another and another until you reach one last circle which will be your eternal prison. Circle of Birth and Circle of Death are identical in that they are both narrow. They also share another quality: they are unrelated to human interests, desires and hidden instincts. Our belonging to the smallest and first circle remains our most intimate belonging. This circle represents beauty. We long for it even when we depart towards the Circle of Death.

Circle are mothers of Being. Greek, Indian and Islamic philosophers talked about them and suggested numerous sets of them. The great Islamic mystic philosopher Ibn Arabi says, "The universe in itself is similar to the central dot, the circle and what is there between them. The dot is God, the emptiness outside the circle is non-existence,…and what is between the dot and the emptiness is possible being."

Widening the Circle
Von Patricia Groves
"We all meet now, once again …This time we are more confident on the future of art in our country, especially the art based on the concept or idea of using new artistic instruments of human, scientific and technological means like video art, photography, computer drawings, synthetic art, performance art." Hassan Meer

Omani artists are venturing boldly into new realms. Taking on the challenges of contemporary art in a unique way, they are breaking into the outer world of global art, while expressing their inner identity in a homeland that safeguards their traditions.

Anchoring the new electronic art are roots in the Arab oral and narrative tradition. The juxtaposition of the two polar opposites - the traditional and the avant-garde - is not meant to shock or to make a value judgment, but rather to bring about a creative integration of the two estranged elements.

And there is a greater purpose. To further their dream, the host of Arab and international artists and intellectuals who form "The Circle" have joined with Omani storytellers and poets in calling for the one common goal of promoting art and humanity worldwide.

And so, this year there is another circle, and next year there will be another, …and another, until, like waves from a pebble, the span of the circle is global. This year, the widening span of the Circle includes regional artists, and participants from Pakistan and Japan.

The Circle grew out of natural alliances among local Omani artists whose community has always been open to new influences. A key figure in the movement to contemporary expression was locally resident Austrian artist Sini Coreth whose leading-edge exhibitions over the past five years had a strong impact in the Muscat arts community.

Several Omani artists who had traditionally worked mainly in the paint on canvas medium began, along with Sini, to experiment in video installations and multi-media approaches. The result was electrifying. The second Circle Exhibition last year transformed the Qurum Cultural Club into a house of contemporary installation art that could have featured in any revolutionary art center in the world.

Circle artists focus on contemporary themes, for instance exposing the dangers of our consumer society. They do not shy away from paintings that are explicit their message of political protest, including representations of the pain and bloodshed in Iraq and Palestine. Or, the message can be a more timeless one about love, beauty, the temporal and the eternal.

In the finest of Arab contemporary art, there is a strong spiritual content, no matter what the subject. With Omani artist Hassan Meer, the spiritual is grounded in life’s rituals and its desperate situations.

"To face the fantasy obsession in which we move to face the sheer unknown realities, as we realize that we were heading to, and coming from … the unknown. This is what indulges us into a contrasting situation between beauty and terror. Fiction and reality. Present and past. Really, we, in our dreams, are the sons of reality. The reality of scare, panic, and death. The fact of the unknown." Hassan Meer

A few Omani artists are probing the great philosophical questions of the human condition and prominent among them is Anwar Sonia, often acknowledged as the father of modern and contemporary art in Oman.

"When I go for the first time into the closed circuit .. into the life embedded with unknown bodies ….and once I am in the heart of it… the corpses were surrounding me from all sides... there I found myself facing myself for the first time... and maybe for the last time too!" Anwar Sonia

The traditional Arab world is now confronting the forces of globalization and naturally this is expressed in contemporary art. Topics may include wastage of precious resources like water and electricity, social problems such as drug addiction, exploitation of children and the commercialization of women.

The political arena today is sharply marked by the potential divide between the Islamic and non-Islamic world, a highly difficult and essential theme tackled in last year’s Circle exhibition:

"What happened after the 11th day? Did the world divide into two halves? With us, or against us? And how did the people survive afterwards? Do they know how they walk, eat sleep? How they live and how they will die? Or is it that they became like a herd… which just awaits the moment of deliverance… wishes or not." Ibrahim Abdulla Al Qami, the Circle, 2004.

With each new year Circle Exhibition Omani artists go hand-in-hand with their Arab and international colleagues further into the conceptual, spiritual and technical challenges of cutting-edge contemporary art. Where will this lead? As the circle widens we can expect deeper cross-cultural innovation, divergence and integration. The stated aim of the intellectuals and artists of The Circle in adopting the "comprehensive concept of multi-faceted art and its implementing instruments is to realize an integration among creative experiences in photography, installation, sculpture, poetry and recitation." (...)

This year, as many new pebbles are thrown into the worldwide pond, no one knows exactly where the new ripples and expanding waves will take us. That is the excitement of the third Circle exhibition - it will be replete with eloquent and essential new messages in the changing horizons of art. And most significantly, as the circle widens geographically, it also brings the artists closer together in their common mission of uniting humanity both spiritually and politically.