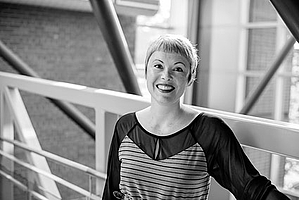 From July 2014, Vicky Chainey Gagnon holds the position of Director/Chief Curator of The Rooms in St John’s, NL. From 2004-2014 she worked at the university-based Foreman Art Gallery located in Sherbrooke, Québec, finishing her tenure there as Director/Curator. She holds a BFA in Film and Art History (Concordia University, Sherbrooke, 1999) and a MA in Interdisciplinary Studies (York University, Toronto, 2005). Until 2011, she pursued doctoral research at Concordia University’s Centre for Interdisciplinary Studies in Society and Culture on the subject of civically engaged museology where she received several grants including the Fonds québécois de la recherche en société et culture and the Social Sciences and Humanities Research Council of Canada.

Since 2005, Vicky Chainey Gagnon has organized projects for the Foreman Art Gallery such as: Time Inside the Image I-III; Above and Below (Adam David Brown, Martha Fleming/Lyne Lapointe, Inger Lise Hansen, Véronique La Perrière M., Penelope Stewart, Irene F. Whittome); Christina Battle: Filing Memory; Charles Stankievech: Over the Rainbow, Under the Radar; Value (Cooke-Sasseville, Antoni Muntadas, Red Channels, Anton Vidokle & Julieta Aranda, WochenKlausur) and the international residency series How Does Art Teach?. In 2009, she launched the Laboratoire communautaire d’art, a special mediation project aimed at exploring, from a creative point of view, urgent contemporary social questions and how they affect our communities.

Her essays and texts have appeared in: ETC, Curator: The Museum Journal and publications by the Art Gallery of York University and the Art Gallery of Nova Scotia. In 2011, she was awarded the Prix de la relève from the Société des musées québécois. In 2012, Vicky Chainey Gagnon is participating in the residency The Decapitated Museum at the Banff Centre for the Arts. She has taught museology in the Art History and Theory program at Bishop’s University and sat on numerous committees, for the Conseil des arts et des lettres du Québec, as well as for the Canada Council for the Arts.