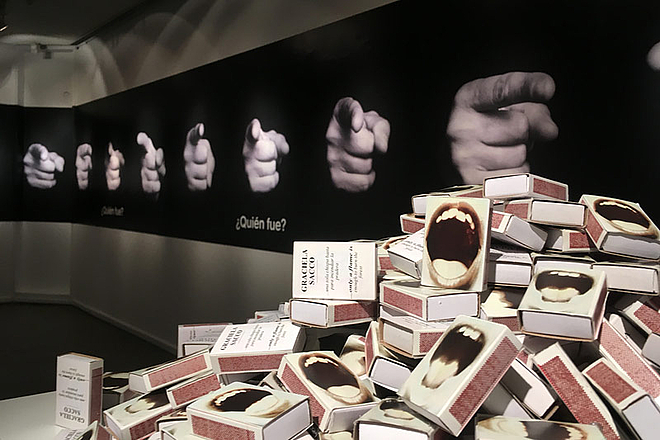 The National Museum of Fine Arts of Buenos Aires presents “Graciela Sacco (1956-2017). Tribute exhibition”, which includes the last artwork created by the Argentinian artist “¿Quién fue?” (Who was it?) in dialogue with “Victoria,” of the MNBA collection, and “Una chispa basta para incendiar la pradera” (Only a flame is enough to burn the forest), all conceived in the 1990s.

The development of Graciela Sacco's work can be seen as a continuity of the approaches engaged by the avant-garde in the city of Rosario in the 1960s, which she also researched. Her singularity was a permanent criticism, without complacency, and the search for new techniques that would allow her to deepen a personal artistic language.

In 1992, Sacco was the first artist to use heliography for printing images on different surfaces such as spoons, suitcases, and shoes, resignifying objects of daily life. One of her most important works done with this technique is “Victoria”, a large wooden fence built with found slats, on which she printed a newspaper photo from a demonstration of May '68 in France, an artwork which was presented at the São Paulo Biennial in 1996.

"Graciela Sacco is one of the most significant and internationally best recognized Argentinian artists. Her works propose a double reading code, at the same time efficient and disturbing. On the one hand, they unfold an irresistible artistic seduction and, on the other, they place us in an unprotected inclemency that unsettles and challenges us," says Andrés Duprat, director of the MNBA.

When choosing the topics to work on, Sacco aimed at showing unresolved social situations, raising issues about famine, hazards and threads, the minimum space which we need for living, people in transit, migrants, frontiers, and those who are left outside. Universal problems, which run through geographies and times. Nevertheless, she never accepted to be labelled as being part of the so-called political art, and didn't like those who claimed to see in her work some kind of revolutionary manifesto.

“Although she often talked about limits, she seemed not to have any. Each and every space opened up possibilities of action, discourse, or reflection. She could exhibit in a museum or do urban interventions appropriating the codes of every location, adding contradicting and discordant elements. Nothing expected or comforting," describes the exhibition curator, Fernado Farina.

Her last work, “¿Quién fue?”, is the last piece of a way of enunciating. A project thought for the public space, questioning the intimate space at the same time. This artwork opens and closes the exhibition with which the National Museum of Fine Arts remembers the artist.