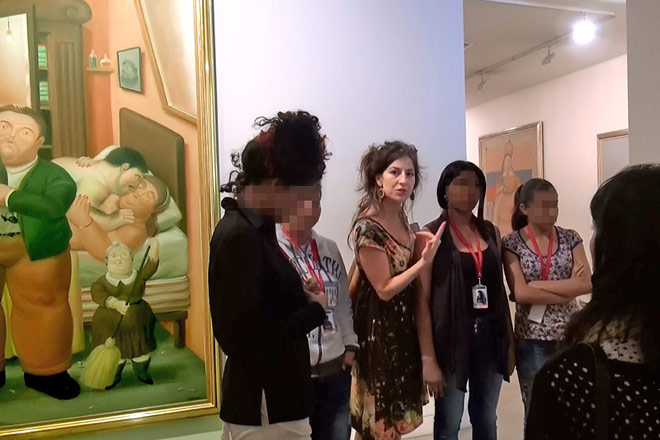 In the districts of Medellin, the neighborhood thugs ask the families to keep their seven- or eight-year-old daughters virgin so they can sell them when they are older. In taxis coming down from the airport and hotels in the city, they offer minors by catalogue to foreigners. Teenage girls are offered modelling jobs only to be tricked into being sexual slaves. There are even mothers who force their own daughters into prostitution "out of necessity." Does anybody talk about it? Does anybody report it? Does anybody do something about it?

Yolanda, Valentina, Jade, and Evelyn, four young women who have suffered sexual exploitation, decided to break their silence. That is why they wanted to participate in La feria de las flores, the project proposed by Núria Güell to the MDE15. This work is the result of an investigation carried out by Güell in the city. She discovered that one of the main issues is child sexual exploitation. In spite of its seriousness, it is a crime that goes unnoticed due to people’s indifference and complicity. Güell got in touch with organizations that work with girls, boys and teenagers who have suffered or are at risk of sexual exploitation and there she contacted the protagonists of her project.

La feria de las flores invites visitors to the Museum of Antioquia to a do a guided tour through a collection of works by Fernando Botero conducted by Yolanda, Valentina, Jade, and Evelyn. The five paintings and two sculptures, which are presented in detail, were chosen by the girls. Based on the characters in the paintings, the girls recount their lives and the situations of abuse they suffered.

"I decided to participate because telling what happened to us is a relief. Also so that other people can’t say it never happened. It’s a great joy when people listen to you. Nobody had ever listened to me before. Nobody knew what was happening to me, or if they knew, they didn’t care," says Yolanda, one of the tour guides. For her part, 16-year-old Valentina adds: "I believe talking to people is a therapy. The most important thing is that people listen to this so their children or their children’s children don’t have to go through something like this."

They both remember their first visit. They were afraid because they did not know what the visitors were going to be like or how they would react in front of an audience. "At first I felt very afraid and angry with everybody. To me, everyone was my enemy," explains Valentina. For Yolanda, it was difficult to start with because she never liked to speak about what had happened to her. "I felt pain inside but did as if nothing happened."

Every visit is different, both for the tour guided jointly by Yolanda and Valentina and for the one guided by Jade and Evelyn. It depends on how they feel, the kind of audience they get, and what they feel like saying to them. Some days there are tears and hugs, others peacefulness, others rage, others irony. "Sometimes I feel a lot of pain but I try to hide it because I don’t want to fall apart before all those people," admits Yolanda.

The works chosen for the tour are, from the girls’ point of view, those that better describe the pain and the situations they have been through. The dialogs were also selected by the four girls and through them they denounce and question rape, the objectification of the female body, the sale of virginity, the families’ complicity in cases of exploitation, the pain they suffered, the drugs they were given to sedate them so that they would not feel, the stereotypes that women are subjected to. Their rage, their mistrust, their story, their tears, their silence, the guilty parties.

The tour ends with the painting La casa de Amanda Ramírez, which from the girls’ point of view combines all the stories they want to tell. What strikes them the most is a woman peeping through the door. At first, Valentina used to cry when she started describing that particular character. After a month doing the tours, she does not cry anymore but she still sighs and says: "This woman is all of us, who see what’s happening and keep silent. Those of us who see and say noting are the ones responsible."

The visitors are left with tears, sighs, applause or questions. Some leave before it is finished, others laugh, yet others leave without reflecting on what they heard.

Yolanda, Valentina, Jade, and Evelyn decided that their future, and the future of many other people, is going to be different. Valentina dreams of being a member of a police force that specializes in children, and Yolanda would like to be a prosecutor, to solve cases like theirs and stop them from ever happening again.