Jimmie Durham: A Matter of Life and Death and Singing 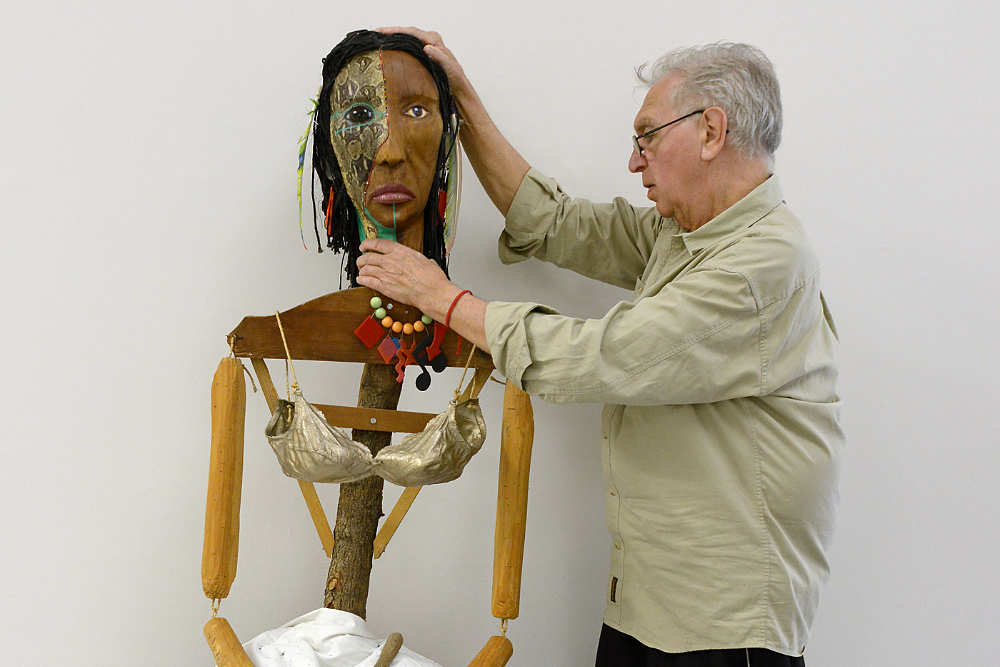 My work might be considered ‘interventionist’ because it works against the two foundations of the European tradition: Belief and Architecture. My work is against the connection of art to architecture, to the ‘statue,’ to monumentality. I want it to be investigative, and therefore not ‘impressive,’ not believable.
Jimmie Durham, 2003

This exhibition at the M HKA (Museum van Hedendaagse Kunst Antwerpen) is the most comprehensive retrospective of Jimmie Durham’s oeuvre to date. His many-faceted practice is an inspiration for many artists, curators, and theoreticians today, not least of the younger generation. He does not make "art about art" but work that is open to the world outside art.

Durham, born in the USA in 1940 and based in Europe since 1994, is one of few contemporary artists to have hands-on experience of political work. In the 1970s he was an activist in the American Indian Movement and the representative of the International Indian Treaty Council to the United Nations.

The title for the retrospective was also used for one of Durham’s earliest solo exhibitions, at the Alternative Museum in New York in 1985. A Matter of Life and Death and Singing reflects his seriousness and wit, his aesthetic and political engagement, his inventive resistance to architecture, and other symbols of the State. All this is part of his uncompromising commitment to what he calls "humanity’s thinking process."

Durham’s retrospective at M HKA comprises more than 100 works from all his creative periods. Many of his ideas and images recur in different forms at different stages of his career, so the exhibition presents "ensembles" of works that are not always chronologically organized.

Durham, also a poet and a prominent essayist, uses all the components of what is today called visual art. Images and words may be nailed or glued or painted onto objects, which may be made "live" in front of an audience. This process may be photographed or filmed. His work is "sculpture" in the widest sense: material appearances in space. The materials range from wood and stone and bone to plastic tubes and printed text. Durham also works with drawing, painting, and video, and he creates his own museums, sometimes in collaboration with his partner, the artist Maria Thereza Alves. One of their joint projects, The Museum of European Normality (2008) is featured in this retrospective.

Jimmie Durham: A Matter of Life and Death and Singing is accompanied by a generously illustrated book with the same title, co-published by M HKA and JRP│Ringier and edited by Anders Kreuger. It contains new essays by Durham himself, English critic and curator Guy Brett, and Canadian curator and scholar Richard William Hill. M HKA is also preparing a collection of Durham’s essays from the last twenty years, edited by Jean Fisher.

This whole exhibition and publishing project is based on in-depth research and the creation of a substantial database, which now contains many of Durham’s texts and information about more than 900 of his works, and which M HKA will continue to develop.

Jimmie Durham:
A Matter of Life and Death and Singing