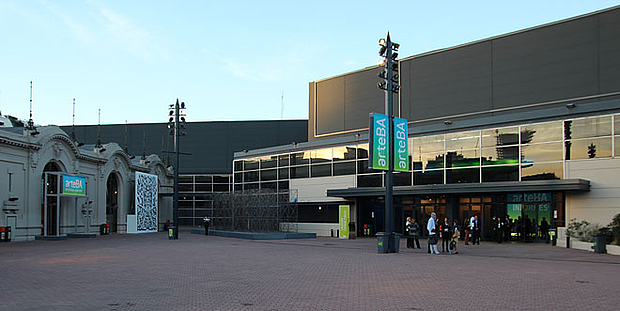 Between May 18 and 22, 2012, the convention center La Rural in the city of Buenos Aires, will be the site of the 21st Edition of arteBA, the contemporary art fair. Participating will be 81 outstanding galleries from Latin America, North America, and Europe, which will exhibit approximately 850 contemporary artists.

Ever since its formation 22 years ago, the arteBA Foundation has been organizing what has become one of the region's most important contemporary art fair promoting Argentine and Latin American art, with the goal of positioning that art in the world market.

The drawing power of arteBA, as attested to in recent years by record attendances of over 120,000 visitors in its five-day span, has made it clear that the fair, always held in the City of Buenos Aires, has become an essential date on the cultural calendar.

Each year curators, collectors, professionals in various cultural fields, and visitors from all over the world come to take in the fair and also enjoy one of South America's most exciting cosmopolitan cities. Buenos Aires presents them with the architectural beauty of its sumptuous past, a vibrant night-life, and a vast range of cultural offerings.

In 2012 the protagonists of arteBA will continue to be the art galleries organized over the various sectors of the fair. In the main space will be galleries from Argentina, Brazil, Chile, Colombia, the Netherlands, Mexico, Peru, Portugal, Uruguay and the US. With the aim of ensuring exhibition quality and keeping the fair in line with international standards, a Gallery Selection Committee chooses for each edition a set number of galleries that adhere to the focus and objectives of the Fair. Laura Batkis (art critic, teacher, and freelance curator, Buenos Aires, Argentina) has presided over the arteBA 2012 Gallery Selection Committee, which has also included, Sonia Becce (Independent Curator, Buenos Aires), Luisa Duarte (art critic and freelance curator, Sao Paulo, Brazil), and Estela Totah (director of the Del Infinito Gallery, Buenos Aires, Argentina) representing Argentine galleries.

In the sector U-TURN Project Rooms by Mercedes-Benz, curator Abaseh Mirvali has chosen 12 galleries from Argentina, Brazil, Mexico, Colombia, Denmark, Germany, Spain, and Switzerland as well as the individual pieces by the artists, hand-picked by her to create a solid, unified project. The goal of the second edition of U-TURN is to bring the best in international contemporary art closer to the visiting public.

The renovated sector of the Arcos Dorados Latin American Painting Competition will inaugurate the Solo Shows section curated by Pablo León de la Barra. In this new format, the curator has asked five Latin American painters to participate along with the galleries that represent them from Brazil, Chile, Colombia, Peru and Venezuela. In its third edition the Arcos Dorados Latin American Painting Competition will, through its regional character, continue to strengthen the bonds between those countries for building up contemporary art in its Latin American identity. The last day of the Fair, an awarding jury, comprising a gallery dealer, a collector, a critic and a representative of Arcos Dorados, plus the public's vote, will determine which the favourite work is. The artist who wins will receive the Acquisition Prize of US$15,000 and his or her work will enter the Arcos Dorados collection. The selected artists along with their galleries are:

Ever since its beginnings, arteBA has also functioned as a venue for discovering and launching young talent. For the past seven years, Barrio Joven Chandon has turned the "youth zone" or "neighborhood for the up-and-coming" of its title into the space at the Fair for publicly presenting emerging artists. The Barrio Joven Chandon Selection Committee has been made up of Akio Aoki (director Vermelho Gallery, Sâo Paulo, Brazil); Diego Bianchi (artist, Buenos Aires, Argentina) and Eva Grinstein (independent curator, Buenos Aires, Argentina). Participating in Barrio Joven Chandon, will be 17 galleries from various provinces of Argentina, as well as galleries from Chile, Brazil, and the United States.

Thanks to the support of its sponsors, arteBA is able to develop projects that enrich the contents of the Fair. Within the setting of EDITION 21 of arteBA, the ninth edition of the arteBA-Petrobras Visual Arts Prize will take place, by now one of the most eagerly awaited prize in the art scene. Victoria Noorthoorn (freelance curator, Buenos Aires, Argentina) has served as director of the latest edition of the competition entitled "UNANIME". The Selection Jury, made up of nine intellectuals chose, among the applicants, the following projects, who will be exhibited at the fair and compete for the Stimulus Prize of Arg $50,000 (fifty-thousand Argentine pesos): POP UP CARTOON presented by Emiliana Arias, Cecilia Lenardón, Silvia Lenardón, Guillermo Martínez, Renata Minoldo, Sebastián Rosés and Luciano Schillagi; SPLATTER MORFOGENÉTICO / ARLT MASCHINE presented by Silvina Aguirre, Laura Bilbao, Roberto Conlazo and Luis Lindner and LA MULTISECTORIAL INVISIBLE presented by Gustavo Doliner, Ana Gallardo, Lola Granillo, Guillermina Mongan, Mariela Scafati and Elisa Strada.

As in the most recent editions of the Fair, Patio Bullrich will again present a project by an established Argentine artist. The artist chosen to participate in arteBA 2012 will be Nushi Muntaabski.

Chandon will again make the first purchase of a work before the Fair opens to the public. In addition, the Argentine Artist Pablo Reinoso will be invited to intervene his space at the Fair with a special project.

CITI will once again host the Fair's pre-opening and participate once more in the Acquisitions Program. Thanks to its generous donation, Malba-Fundación Costantini will select a work that will add to the richness of its collection. The work chosen will be on display during the Fair at the company's space.

La Rural, the convention center in which the Fair is held, also renews its commitment to acquiring art works, giving continuity to Impulsarte, its Stimulus Program for Contemporary Art. Through a committee specially appointed for the purpose, La Rural will choose works exhibited at arteBA.2012 to add to the company's art collection.

The airline LAN will once again offer its free service of audio guides, to give visitors the opportunity to get closer to the artists' creative expression through an exclusive tour mapped out by an art critic and read by the well-known radio and television commentator Lalo Mir.

Aeropuertos Argentina 2000 will disseminate information about arteBA in the country's main airports and, in keeping with the celebration of twenty editions of the Fair and showing its commitment to art and national culture, AA2000 will present at its stand works by the artist Julio Le Parc.

The Faena Arts Center will be present at the fair showing an important art piece of cuban artists Los Carpinteros.

The Argentine insurance company Zurich will continue its arteBA-Zurich Matching Funds program which, in this its eight edition, will allow various museum to enhance their collections with works acquired at the Fair from the combination of funds from Zurich and the museums themselves.

With the mission of strengthening arteBA's presence abroad, the arteBA Foundation continues to add distinguished members to its International Committee. The International Committee was created for the 2010 bicentenary edition of the fair, with the aim of having eminent figures, through their commitment and ad honorem work, promote the fair around the world and interest key players on the international art circuit in the week-long fair. The International Committee for arteBA.2012 is being led by Nelly Arrieta de Blaquier and comprises Teresa A.L. de Bulgheroni, Marlise Ilhesca de Jozami, Jean-Louis Larivère, Iván de Pineda, Dudu von Thielmann, Andrés B. Capriles, César Gaviria, José Marin, Erica Roberts, Juan Carlos Verme and Alexandra de Royere.