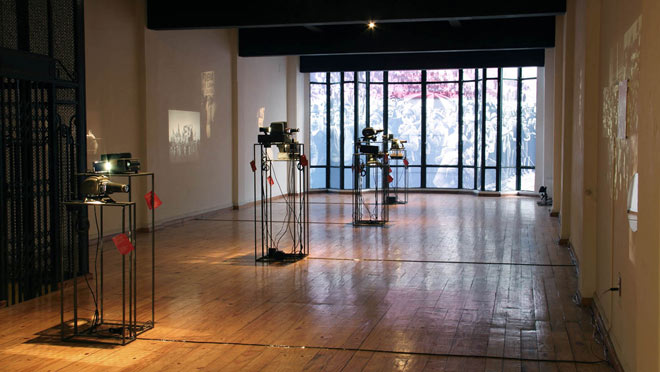 I find the whites and the amnesias more interesting than memory itself. (RR)

The Brazilian artist Rosângela Rennó is known for being a photographer who doesn’t actually photograph. In the 1980s in Brazil, she became a crucial reference in relation to concepts of contaminated photography and photography of appropriation, after deciding to substitute the photographic act with the analysis, appropriation and reconfiguration of historical and archival images.

One of the Brazilian artists with greatest international acclaim, Rennó has developed an extensive body of work that continuously draws attention to the history and genesis of photography and film, and in relation to contemporary modes of image capture, documentation and exposure. More recently her work has broadened its conceptual discourse to encompass and address the institutional functioning and economy of the art, photography and library systems, among others (A Última Foto (2005), 2005-510117385-5 (2010), <emphasize>Menos-valia</emphasize> (2010)). Ever present in her complex and thorough projects – whose sources range from negatives belonging to penal archives to photographs published in newspapers and nineteenth-century images taken from national libraries – Rennó comments on the power relations inherent in the social and political instances relative to the photographic record. Her interest in intertextuality, where she incorporates text and images both taken from mass media, reflects also her attraction for the stories of the non-winners, all those whose identities get lost in the midst of generalised anonymity. In this context she problematizes, at the same time, the delicate relationship between formal elegance and social denunciation.

For her exhibition entitled Rio-Montevideo (after a referential department store situated in Montevideo city called Paris-London), Rennó was invited by the curator Veronica Cordeiro in association with the Latin American photography festival Fotograma to reside in Montevideo for a month in order to work with a historical photographic archive belonging to the communist newspaper "El Popular" (1957-1973). The tens of thousands of negatives comprising the said archive had been hidden in tins and one large suitcase within the walls of the newspaper’s building by the photographer in charge, Aurelio González, at the onset of the military coup, in June 1973. Displaced during the eleven-year dictatorship, the negatives and series of prints would only be found again 33 years later, in 2006. Since then, Montevideo’s Centro de Fotografía (CDF), organiser of the biennial photography festival Fotograma – the third edition of which currently hosts this project – has been conserving, cataloguing, digitising and formatting the entire archive.

Rennó’s project unfolded as a result of this encounter. At once aware of the distance between her own reality and that represented by the archive – an urban and rural history of Uruguay from the mid 1950s to 1973 – and taking advantage of that distance in order to approach delicate issues such as the dictatorship with "visual objectivity" vis-à-vis the archive itself, the artist selected a series of images which surprise the spectator. Considering the number of images reflecting violent and spectacular confrontations between military police and workers, students, impressive uprisings, civil war, blocked streets, etc, instead one is presented with a subtle, eclectic group of 30 images which vary from a boxing match and a football game to presidential visits, the murder of a student five years before the coup and a young girl getting her first communion.

The selection echoes the mise-en-scène: this is not about the images and their historical context, only. Rather, Rio-Montevideo is about loss, death and resurgence. Images not in their visual context, but in their temporal condition: what did they mean then, when González and other photojournalists were militating with their cameras across the country, and what do they mean now, recently unearthed, only just "saved" from eternal loss, safeguarded, a document that is part dead, and part potentially enlivened.

The installation is comprised of 14 historical slide projectors – models ranging from the 1920s to the 1980s – found in flea markets between Montevideo and Rio de Janeiro which project one or two images selected by Rennó from the El Popular newspaper archive. The artist had slides made in 3 different formats, 35mm, 4.5x4.5 and 6x6, 14 metal tables designed and made to measure for each projector, as well as a monumental blow up of an image from 1968 taken at a football match in the Estadio Centenario with a strong military presence, applied to the 5x10 metre art-deco bay window that looks onto the street. At night, illuminated from the inside, the image looks out onto the street as if it were an enormous light box.

This project proposes another possible glance at recent history, utilizing optical viewing mechanics which have also been destined to the past, to the waste; by reactivating them, Rennó creates multiple phantasmagorias which question, inherently, our relationship to history and, more importantly, our relationship to how our understanding of history is actually constructed.