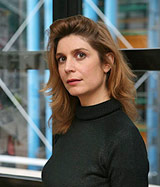 Following her studies in art history, Christine Macel (born in Paris, 1969) was a curator of the heritage and inspector of artistic creation for the "Délégation aux Arts Plastiques" of the French Ministry of Culture (from 1995). Since 2000 she has been Chief Curator at the Musée national d’art moderne – Centre Pompidou in Paris, where she is responsible for the Department of "Création contemporaine et prospective", which she founded and developed. She was the curator of the French Pavilion at the Biennale Arte 2013 (Anri Sala) and the Belgian Pavilion at the Biennale Arte 2007 (Eric Duyckaerts).

She also served as artistic director of the Festival du Printemps de Cahors for two years (ExtraetOrdinaire, 1999; Sensitive, 2000), and curated the exhibitions by Jeppe Hein at the Moore Space Miami (2005), by John Bock at the FRAC in Marseilles (2006) and by Ziad Antar at the Sharjah Foundation (2012).

In 2015 she curated Nel Mezzo del Mezzo. Arte contemporanea nel Mediterraneo, Museo Riso in Palermo; What We Call Love, from Surrealism to Now, Irish Museum of Modern Art in Dublin; Une histoire, art, architecture, design, des années 80 à nos jours, Centre Pompidou, which will be inaugurated at the Haus der Kunst in Munich in March 2016. She is the curator of Collected by Thea Westreich Wagner and Ethan Wagner with Elisabeth Sussman, inaugurated at the Whitney Museum in New York in November 2015 and scheduled to open at the Centre Pompidou on June 10th 2016.

She is currently working on two exhibitions for the Centre Pompidou: Dear Friends, donations of the last 5 years (March 2016); Melik Ohanian, Marcel Duchamp Prize (May 2016).

She contributes to the magazines Artforum and Parachute (since 1995 with articles about Rebecca Horn, Pier Paolo Calzolari, etc.), Flash Art (an interview with Koo Jeong A in 2005, Young French Artists in 2006, Gyan Panchal in 2008, etc.), Art Press (articles and exhibition reviews), Beaux-Arts Magazine, Parkett (with a recent essay on John Waters) and Cahiers du Musée national d’art moderne.

She is the author of many essays, books and catalogues, including the essay Le Temps pris/Time Taken (French, English, Monografik/Centre Pompidou 2008) on the theme of contemporary art and the concept of time in art works. She recently published an essay on Lygia Clark in the catalogue of the MoMA in 2015 and one on Anri Sala in the catalogue of the New Museum of New York (Phaïdon, February 2016).