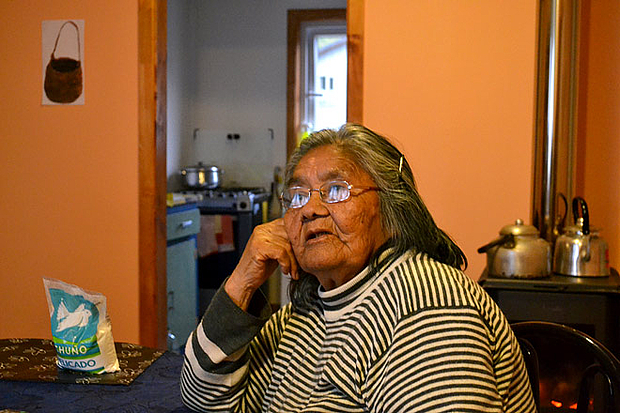 The Yagan people arrived six thousand years ago to the islands between the Beagle Channel and Cape Horn. They were a nomadic seafaring people, who migrated using canoes close to the coasts of the islands, building temporary huts on the beaches and along the coastline of these islands. There was no government, nor social hierarchy beyond family ties. Food consisted mainly of mussels, fish, seals and whale meat. After the 18th century seal and whale hunters gradually began to erode their food supply. In the 19th century this tribe fell victim to multiple illnesses brought by European seal hunters, missionaries and gold prospectors which spread in epidemic proportions throughout the region. Whereas in 1850 the Yagan population reached 3,000, at the beginning of the 20th century it was reduced to a mere two hundred. According to information obtained in 2011, only eight pure race Yagan are alive today.

The story of the wolf

There were two little girls who went to play in the sea swell when the current rose and fell. One day the wolf came along and fell in love with the older girl. When the girls stopped playing and arrived home, the smaller one told her mother that one of the wolves was after her sister. The older sister denied that anything had happened. Nevertheless, she had felt attracted to the wolf.

The couple remained ashore for quite some time and had a child. The child was born and took after the mother, in that she was not a wolf. When the child was around three years old, the wolf told his wife that he wanted to get to know his in-laws. However, his wife said no, telling her husband that this would not please the family.

The wolf replied that it would and insisted on meeting them. His wife finally gave in and said: Very well, let’s go, but let’s come back immediately afterwards. When they arrived, the brothers in law took an instant dislike to him. They thought; a wolf for a brother-in-law? Certainly not! But the mother-in-law accepted him and let him into her tent. Meanwhile, her sons set about planning to kill their brother-in-law and told their mother: why don’t you take my sister to gather sea urchins tomorrow so that we may kill the wolf? At first, the mother was against the plan but in the end, she agreed. The following day she invited her daughter to go and gather sea urchins, but the daughter refused, saying: "No, I don’t want to go". How can I leave him on his own? My brothers wish him harm. The mother insisted. "Why should they harm their brother-in-law if they’re fond of him?" The daughter then agreed, saying, "let’s go but let’s come back quickly". As mother and daughter were leaving, she told the wolf: "If anything happens, call me." While they were gathering sea urchins, they heard the howling of a wolf. She said: "Something has happened to my husband, let’s go back." But her mother said: "He must be playing with his brothers-in-law." They remained for a little longer before heading back. When they came to the bay, their child was eating small pieces of wolf meat, a piece of his father and singing: how tasty the prey was. The prey of my father is so tasty. The mother reacted by grabbing a sea urchin and hurling it at the child, hitting it on the forehead. The knock was sufficient for the child to turn into a fish and throw itself into the sea. The fish now swims away. It has a mark, a kind of small bump on its forehead.

The tale of the fox

I don’t know whether it was a wolf or a fox. I don’t know which of the two. But the story goes that only he was the owner of water, a water well which belonged to him and no-one else. He was the water’s owner and whenever he wanted, he shared it and invited people to drink, and refrained from doing so when he did not wish to. When others asked him whether there was water, he said that there wasn’t. The others died of thirst.

What I know, was taught to me by my grand aunt when we were girls: when she was a girl her parents taught her respect for elders. When you bring something, they told her, mussels or the like, share them with others. When she was young she gave to all the elders. When she got up in the morning and went to take water from the well or the river she left some outside all the huts. It was a task carried out by young women. Young men gathered firewood for their grandparents. They would go to the hills where it was plentiful. All the dwellings needed the firewood which the youths collected. I taught my children when they were young. When hunger strikes, share but don’t steal. If there are some pesos and someone asks them for 1000 pesos, give 5000 pesos, if you have it. If you don’t have it, don’t give it; clothes or something else could be given, instead. And if you have one single change of clothes, you still have to give something. That is how my children have turned out to be.