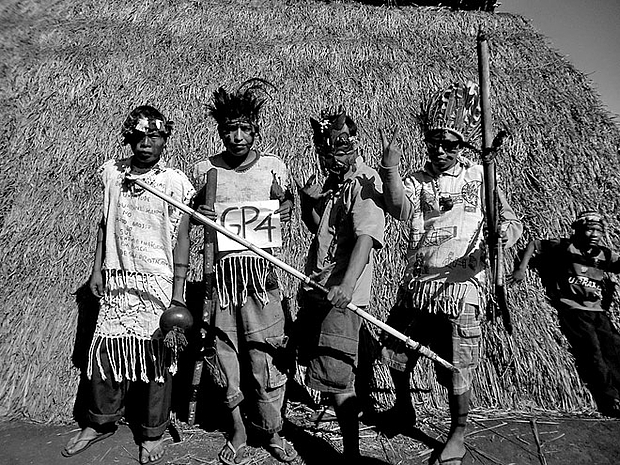 perhaps it was in the late afternoon on Sunday, 18 November, 2011::: the body of NIZIO GOMES [a kaiowa indigenous from the southern region of the state of Mato Grosso do Sul/BRAZIL near the border with paraguay] falls to the ground never to rise up again, joining other indigenous bodies, murdered and made to "disappear" for political reasons, unknown, anonymous, forgotten… seeking indigenous marks on my face, I transit through the AMERICAS, placing myself alongside other relatives, comparing our similarities. ___I arrive in MIAMI __/mI’ã mi/ [mI’ æ mi], as the tekestas, the indigenous people exterminated from this region, called the river that cuts the city that became one of the world’s great tourist centers and where one of the big international contemporary art fairs is held ___ --- I arrive there for my name to appear in texts of important newspapers of the United States of America, a country that exterminated a large part of the original peoples of the lands now called the AMERICAS. there, in that small piece of peninsula that juts into the gulf of mexico with a strong cuban presence, the first exterminations took place at the hands of the spanish and their mercenaries---__there are those who say that the last surviving indigenous people were sent to havana in the late 18th century; having been in CUBA before the USA, I had never heard this tale. listening to this case, my ears still confused, I hear about an old navajo, stories of nuclear/military tests held in indigenous lands in the desert of the country’s south, where they disregard the existence of other lives. after crossing so many northern borders I head to the south of the continent and find a people who up to then did not make me exist. I mix guarani and kaiowa within myself and learn on a thursday night, with them, to pray for the world not to end. I hear about the daily deaths, begun with the encounter with the great 16th-century navigations, continued until today at the hands of mercenary assassins [gunmen, hitmen] who for a small amount of reais [$] received from the large landowners steal the life of KAIOWAS, GUARANIS and TERENAS who seek to retake a part of the land that was plundered from them during the rush toward the west, in a project of the republic to populate an area considered devoid of possibility and of british interest during the so-called AFRICA and ASIA apportionment. I, there, remembering my mother’s mother, am now a kaiowa layer beginning to learn the words and to understand the world from the standpoint of che amba [the place where I am]___my mother did not have to learn the BORUM words, since my mother, in 1944, was silenced in the esteemed colony concentration camp psychiatric hospital of barbacena – minas gerais / BRAZIL. in kaiowa I learn words that don’t sound KRENAC to me, what we still have of BORUM-------------------- I, baptized paulo sergio da silva in the apostolic roman catholic church, am now many names: paulo da silva_ paulo nazareth_ mohammad mohammed_ awa hae jeguata jopara_ awa jeguakai nreda_ kwamba kutembea_ mzungu-mwafrican_ muzungu nywele nyeusi_ socodkain_ tionrin_ ukuthi ukuhamba_ ..... we do not know if-how-when the body of NAZARETH CASSIANO DE JESUS_ NAZARETH DE JESUS _ mother of my mother [ANA GONCALVES DA SILVA_ ANA GONCALVES_ ANA DA SILVA], died there was a catholic, afro-religious or some indigenous funeral or if it was forgotten in a common grave or some ward of a public/private hospital or if she is still alive forgotten in some state asylum_. like my mother’s mother the body of NIZIO GOMES struck down by mercenary hands did not have a funeral and its destiny is unknown to relatives and the state:::: they do not call it a disappearance for political reasons and they seem to be oblivious to our story. I continue to struggle: no me olvides cuando yo sea un nombre importante!