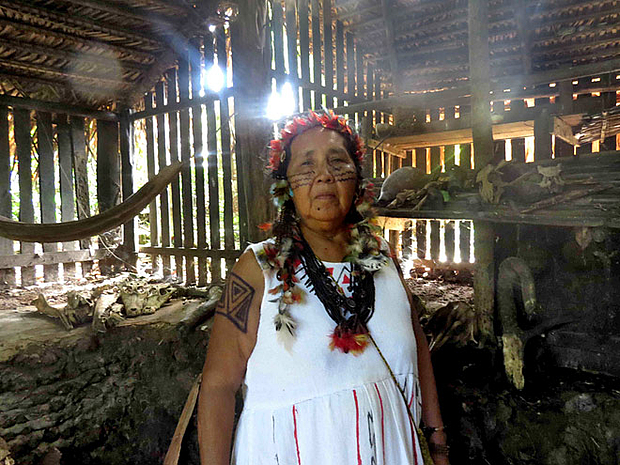 The name sounds strange: Sateré-Maué. It is one of the many designations for the Maué Indians. Sateré is a fire lizard. Some believe that Maué means "intelligent and wise parrot", others argue that it is an onomatopoeic term used by the whites to say "bad man". The language of the Maué Indians belongs to a language family of Tupí, with the contribution of many words from the mother language and others. Nowadays, there are a few more than ten thousand Sateré-Maué voices.

The people belong to a pre-Colombian culture which is considered as being descended from the Incas. During the times of their ancestors they were said to have descended from the Andean Altiplano and entered Amazonia, occupying a vast area between the Rivers Madeira, and the state of Amazonas and the headwaters of the Tapajós, in Pará. In 1826 more than 35,000 were counted.

When the uprising of the Cabanagem natives broke out, the Maués fought against the Portuguese (1835 – 1840). In the twentieth century, during the conflict between Amazonas and Pará, they took the side of army of the state of Amazonas (1916).

However, it was not the war that made them well-known. It was the Maués who invented the Guaraná culture. They turned a wild creeper into a bush which was cultivated in plantations and then used the fruit. Guaraná of the Maués is considered to be the best and is exported, albeit in small quantities. It is considered superior to that produced in the region belonging to the municipality of Maués.

Since the teaching of the catechism arrived with the first Jesuits, Maué culture has undergone changes in its religious practices. Corpses have long since ceased to be mummified, however, until today the ceremony of the Fire Ant, also called Tucandeira, has been preserved. During their puberty, Indians of both sexes undergo an initiation rite: hundreds of these ants are enclosed inside a straw glove. The young participants must put their hand inside the glove and withstand the pain for as long as possible. The body speaks through the hand, which is painted with the juice of the Jenipapo (fruit), which helps them to bear the bites imposed by the ritual. In spite of the four hundred years of contact with European culture, the Maués have preserved their voice, as was recorded by the anthropologist Nunes Pereira in 1954. "We are like a bird in the world."

"It has been good to have you here: and may you take these words in Sateré-Maué with you to your Brazilian companions and out into the world, so that they might know that Sateré exists here in Barreirinha and that they are the protectors of nature."