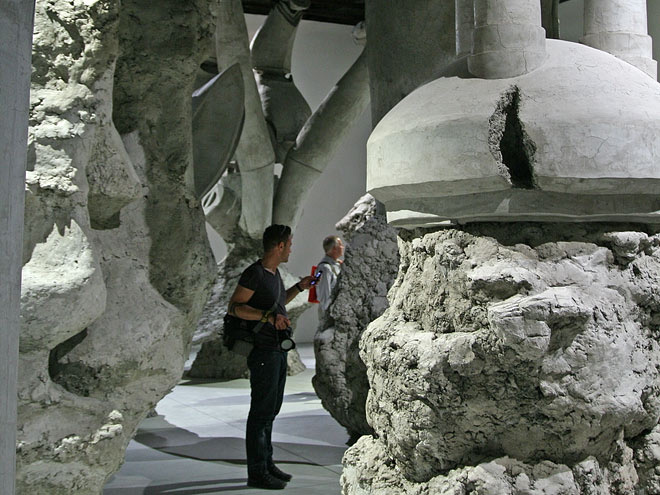 The work by Adrián Villar Rojas presented at Venice Biennial belongs to a series of monumental clay sculptures that develop out of fiction stories and scientific possibilities. They could be seen as material manifestations of alternative universes (multiverses), an apparition that contests our everyday notions of the world and reality.

The figures have overwhelming scales and aged surfaces. They look like the remains of a devastated Empire or the ruins of an ancient culture that receded long ago. But their appearance is deceptive. These volumes erected like monuments could also be a possible transfiguration of our present or even a glimpse into a potential prospect. Past, present and future merge in them disarticulating any sense of temporality.

Villar Rojas draws his inspiration from the theory of multiverses. This theory states that diverse universes could coexist as a consequence of slight deviations in the evolutionary processes of the cosmos. In those parallel worlds, humans and other creatures have different forms, appearances and properties. So the sculptures could be seen as materializations of these beings or even as a variation of ourselves.

Simultaneously, a story is being told. The members of a final civilization gather together in an old amphitheater to represent their origins until they die. Their remains are now the last artwork of their history, a last aesthetic act.

"I build monuments because I’m not ready to loose anything", Adrián Villar Rojas has stated. But a sensation of lost is still there. The sculptures point to something extraordinary and beautiful that we are unable to understand. They are monuments to a nameless memory and also metaphors of silent resistance.

A last artwork of humanity. 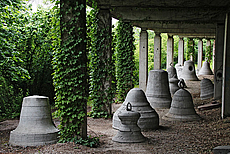