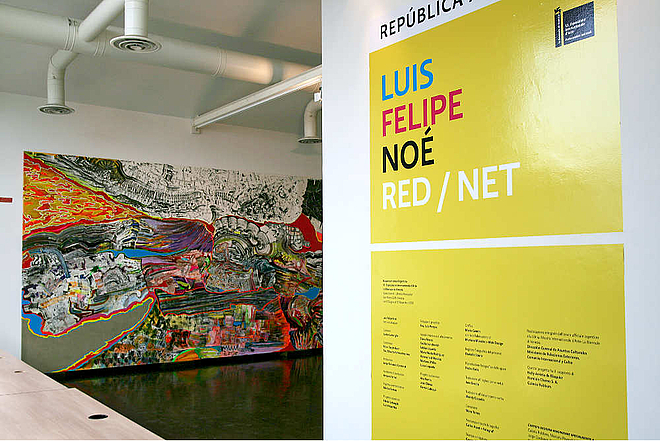 Noé's work, artistic but also theoretical and academic; historical, but also absolutely present, is a central part of the last half century Argentine art. In all this time he has participated and influenced in a direct way Argentina's cultural life, also during his exile (because of the military dictatorship that took power between 1976 and 1983).

Since the sixties, when he founded and took part of the group known as La Nueva Figuración (the new figuration) or La Otra Figuración (the other figuration), up to nowadays, Noé always has painted from a place and a time that are in turn inscribed in his work, as a part of it and producing an interdependence between time and space coordinates; between the work and its context. The painting is here a black box that transforms and contains that context. The crisis and tensions of the world and of Argentine history are a permanent and constitutive subject in Noé's work. Hence, as well, the way that the artist chooses to title his works, with ironic sentences regarding the present paradoxes.

So the two mural paintings facing each other that make up this exhibition, from their own materiality, complex and fragmentary, expansive and detailed, transform these tensions in their subject. In both works there's an organization that manages to multiply and politicize the senses by means of the visual. Noé's murals, where a multitude of images coexist in different cores of attention, through different manners of painting and a set of variations (from miniature to gestures, from detailed to symphonic), imply the critical acceptance of chaos as a creative and coexistential principle.

His works are pure tension of the senses and a way of transforming knowledge in painting and painting in a way of knowing the world. Noé's two murals, devouring and inclusive --revealing the energy of one of the most expansive and vitally young artists of present Argentina--, work like nets that summon, catch, show, build, propose, discuss the state of the world.

In this time of global puzzlements, Noé's work provides a lucid glance and the challenges of a great artist.