The 32nd Bienal de São Paulo means to reflect on the current conditions of life and the strategies offered by contemporary art to harbor or inhabit uncertainty. The exhibition will be held from 10 September to 11 December 2016 at the Ciccillo Matarazzo Pavilion, featuring 81 artists and groups (see the list).

Titled Incerteza viva [Live Uncertainty], the 32nd Bienal de São Paulo will focus on notions of uncertainty to reflect on the current conditions of life and the strategies offered by contemporary art to harbor or inhabit uncertainties. The exhibition sets out to trace cosmological thinking, ambient and collective intelligence, and systemic and natural ecologies.

In order to objectively confront the big questions of our time, such as global warming and its impact on our habitats, the extinction of species and the loss of biological and cultural diversity, economic and political instability, injustice in the distribution of the Earth's natural resources and global migration, among others, perhaps it's necessary to detach uncertainty from fear. Uncertainty is clearly connected to notions endemic to the body and the earth, with a viral quality in organisms and ecosystems. Though it is related to the word crisis, it is not equivalent to it. Uncertainty is, above all, a psychological condition linked to individual or collective decision-making processes, describing the understanding and non-understanding of concrete problems.

The notion of uncertainty is part of the repertoire of many disciplines – from mathematics to astronomy, and also including linguistics, biology, sociology, anthropology, history and education. Unlike what goes on in other fields, though, uncertainty in art points to disorder, taking into account ambiguity and contradiction. Art feeds off uncertainty, chance, improvisation, speculation and, at the same time, it attempts to count the uncountable and measure the immeasurable. It makes room for error, for doubt and even for ghosts and the most profound misgivings, without evading or manipulating them. Would it not make sense then to take art’s numerous methods of reasoning and making and apply them to other fields of public life?

Learning to live with uncertainty can teach us solutions. Understanding the significance of Live Uncertainty on a day-to-day basis means remaining aware of the fact that we exist immersed in an environment that is ruled by it. As such, we can propose other means of action in times of constant change. Discussing uncertainty requires an understanding of the diversity of knowledge, because describing the unknown always implies to interrogate what we take for granted as known. And yet it also means valuing scientific and symbolic codes as complementary rather than exclusionary. Art promotes an active exchange between people, recognizing uncertainties as guiding generative and constructive systems. 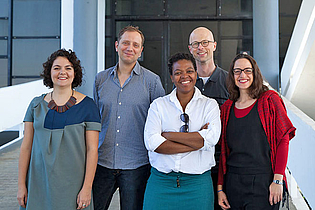