Opening on 6 September 2014 (Preview: 1-5 September), the 31st Bienal de São Paulo is curated by Charles Esche, Galit Eilat, Nuria Enguita Mayo, Pablo Lafuente and Oren Sagiv with associate curators Benjamin Seroussi and Luiza Proença. The title "How to (...) things that don’t exist" is a poetic invocation of art’s capacities and its ability to reflect and act upon life, power and belief. The sentence has a variable formula in which the verbs constantly change, anticipating the actions that might make present in contemporary life the things that don’t exist, are not recognized, or have not yet been invented.

Included are 81 projects and more than 100 participants, totalling around 250 artworks. The focus of the 31st Bienal is on contemporary conditions and how art projects can engage with and activate histories, individuals and communities today. The Bienal was shaped by a series of talks in different open meetings organized by the curatorial team across Brazil and other cities in Latin America and the world.

The use of the word ‘project’ is intended to create a distance from the traditional idea of an autonomous artwork made in a studio by an artist. By using this word, it is possible to introduce a broader range of contemporary cultural practices and include people working in other disciplines, such as educators, sociologists, architects, performers. The term also serves to encourage collaboration and trans-disciplinary ways of working amongst the Bienal participants. Each project is an independent contribution, but may consist of many artworks by individual or collective authorship. More than half the projects have been made specifically for this Bienal, many by international artists who have produced work in response to a residency in the city and the opportunity to travel further in Brazil.

A crucial aspect of the 31st Bienal is the way the Ciccillo Matarazzo pavilion is understood as divided into different areas, each with its own architectural logic and particular qualities. The ground floor is called Park, and is connected and opened up to the surrounding landscape, to become a space for reception, events and meetings. The Ramp adapts to the verticality and the circulation of the pavilion’s main access route (the ramp) to create a series of curvaceous spaces linked by a monumental spiral. Here, the artworks and projects are shown without enclosing rooms, and are related to each other both vertically and horizontally. The Columns articulates the largest continuous space of the pavilion on the second floor, dividing it into densities with areas of light and shadow, or sound and silence, that create an interplay of experiences. A small, central area isolates some singular artistic statements and the three different areas from each other.

While the Modern Movement has an affective and vital history in Brazil, it is no longer representative of a living present. Therefore the aesthetic criteria of modernism and the striving towards progress are not prominent in the 31st Bienal. While some projects will reference the period, in most cases the modern is simply not a force that is at stake for the artists’ research and work. This approach to the recent past means that a different hierarchy of sources and inspirations can be established, one that recognizes the possibilities in the pre-modern and the non-modern, or in the spiritual and popular culture, to offer different readings of contemporary conditions. It also means that the influence of collective imagination, social activism and political conflict is as significant as the heritage of artistic practice to the artists in the 31st Bienal.

A joint production with Itaú Cultural

This year, Itaú Cultural joins forces with the Fundação Bienal de São Paulo as co-producer of the 31st São Paulo Bienal. The ties between the two institutions stem from an affinity of activities that furnish new content relating to creative processes. This joint effort further strengthens the already longstanding partnership between the Bienal and Itaú Unibanco, one of its main sponsors since 2010. These initiatives corroborate Itaú’s understanding that the preservation of, reflection on, access to and the dissemination of culture are crucial to the development of a critical and independent society.

This edition consolidates the partnership between the Fundação Bienal de São Paulo and Serviço Social do Comércio (Commercial Social Service), intended to fuel and foster the creation and diffusion of contemporary art. These two institutions have been working together since 2010 and their partnership has reaffirmed their conviction that the fields of culture and art are vocational hotbeds for a spectrum of actions of great public benefit. In addition to educational actions, such as curatorial encounters and workshops, the Bienal/SESC partnership plans to co-produce artworks and projects to be exhibited, at a later date, at SESC venues throughout the state of São Paulo. 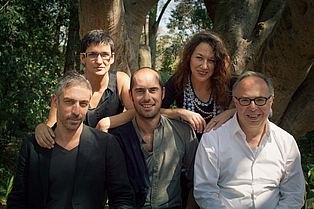