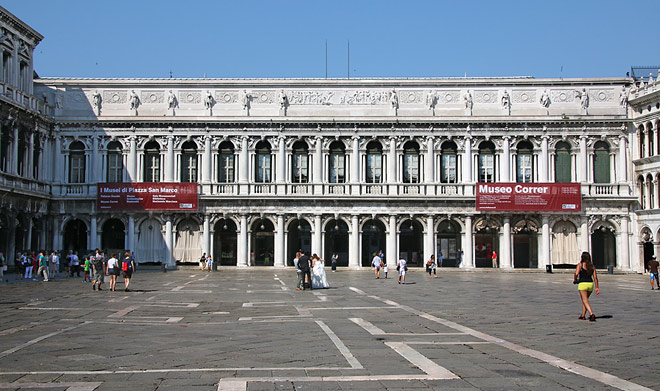 Teodoro Correr (1750-1830) was a passionate art collector who donated to the city not only his works of art, but also the palazzo at San Zan Degolà in which they were housed, and the funds to maintain and further extend a collection which ultimately became the core around which the Musei Civici di Venezia (Civic Museums of Venice) developed.

The Napoleonic Wing is located between the Procuratie Vecchie and Nuove, the two long arcades of buildings which extend the length of St. Mark’s Square and had housed the offices and residences of some of the most important political authorities of the Venetian Republic. The Wing was finished in the 19th century, when Venice was under Austrian rule, serving as the official residence of the Habsburg Court on their frequent visits to the city, and would after become the Venetian residence of the King of Italy. With monumental double facade, atmospheric portico, ample staircase, and opulent ballroom, the Napoleonic Wing was designed by the architects Giovanni Antonio Antolini, Giuseppe Soli and Lorenzo Santi. The Venetian painter Giuseppe Borsato worked on the interior decoration.

The Museum Correr is laid out in various sections:

- In the Napoleonic Wing, the Neoclassical Rooms house a collection of works by the great sculptor Antonio Canova (1757-1822).

- The Imperial Apartments of the Royal Palace, where the Empress Elizabeth of Austria resided during her visits in Venice, are nine carefully restored rooms, which opened to the public in July 2012.

- The Procuratie Nuove, former offices and residences of important civic authorities of the Republic of Venice, designed by the architect Vincenzo Scamozzi (1552-1616), now houses collections that document various aspects of Venetian History, from daily life to public instutions, from naval achievements to local festivities.

- The "Wunderkammer" rooms, a "collection of wonders" of more than 300 artifacts, paintings and precious rarities of Venetian Civic collections, that can be visited since 2013.

- The Pinacoteca in the second floor displays a rich art collection, covering the period from the earliest days of Venetian painting up to the 16th century.

Walking along the rooms of the Procuratie Nuove, the visitors of Museo Correr reach authomatically the Museo Archeologico Nazionale di Venezia, and the Biblioteca Nazionale Marciana.

The Museum Correr also hosts temporary exhibitions of Modern Italian and International masters, as well as historical exhibitions, in cooperation with instituions in Italy and other countries.

(Text summarized from the museum's website and various sources)

Detail of the façade