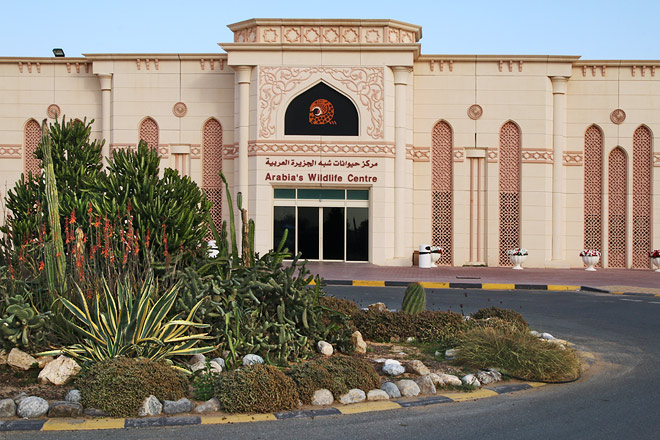 The Arabia's Wildlife Centre is located at Sharjah's Desert Park, approximately 25 km east of the city of Sharjah, on the highway E88 to Al Dhaid.

The zoological park houses the world's largest collection of Arabian wildlife, demonstrating the diversity of the fauna found on the peninsula, and creating awareness of the species in danger.

Whereas for the visitor it is a complete indoor experience, there are several areas where the animals live in their natural environment, and can be observed through large glass walls.

The displays are divided up into various sections, each dedicated to a group of species, including:
- The reptile, fish and insect houses, where many of the Arabian snakes, lizards and chameleons, as well as insects such as camel spiders and scorpions can be seen.
- The bird aviary, set indoors in a wadi and desert environment, which contains several species of indigenous birds, including weavers, partridges, and houbara bustards.
- The houses of the smaller cats of the desert, displayed in the same hall of of the aviary
- The nocturnal houses which show a variety of mammals primarily active at night, such as foxes, porcupines, hedgehogs, mongoose and rodent species
In the ouotdoor areas, baboons, Oryx antelopes, wolves, hyenas, cheetahs and Arabian leopards can be observed in their natural environment.

Other facilities at the Desert Park are the Breeding Centre for Endangered Arabian Wildlife, the Natural History Museum, the Botanical Museum, and Children's Farm.