The presence of this Nike (Victory) relief in the debris of the Byzantine church was not recorded by the first explorers. It was, however, noted in 1973 by Bagatti. Because the residence built in the early 20th century was the house of Peake Pasha from 1920 to 1939, it was suggested by Pierre Bikai (personal communication) that pieces of archaeological interest may have been given to the Commander of the Arab Legion or to a subsequent occupant of the house. This would explain why this sculpture was found so far from its original location, believed to be Khirbet et-Tannur.

According to its style and its dimensions, this Nike relief belongs to the series of the sculptures recovered from Khirbet et-Tannur, a Nabatean temple discovered in the 1930s southeast of the Dead Sea, and excavated in 1937 by N. Glueck. The temple is located on an isolated and bare summit which overlooks the confluence of Wadi al-Hasa on the north-northeast. 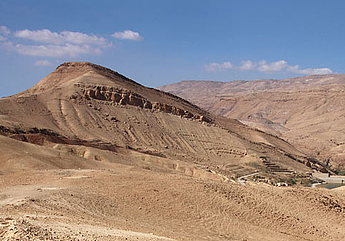