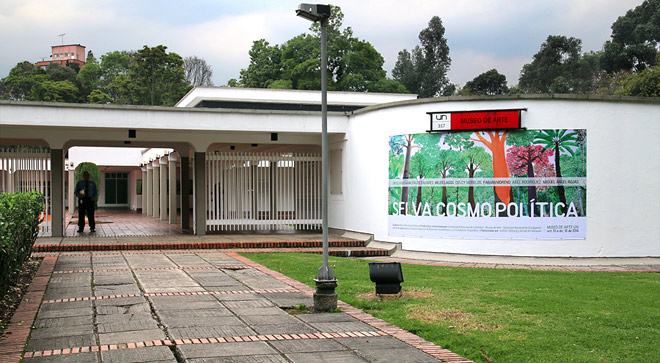 The approach of Selva Cosmopolitica is both cosmogonic, as it encompasses the atavistic culture and knowledge of the indigenous peoples, and cosmopolitan, with a global vision and an intercultural layout, and also political. Not only because it shows the lack of conscience and care towards the notion of life and living beings, but also because it points to the “other,” to another culture in friction, that is essentially different to our social and economic structures -- after all mediocre and opportunistic -- which could be, and inevitably will be, re-examined, while life is vulnerable to the absence of conscience and the damage seems already irreversible.

The exhibition shows sick cultures in friction that struggle to find their way and survive. Thus it is of crucial importance that the concept of life makes its way through and above all the interests and blunders of contemporary society.

The questions posed to us are: What can we learn from indigenous knowledge? And how can we contribute to the evaluation and revival of our relationship with the earth and the living world?

Complete curatorial text in Spanish and more information:
>> Website of the Museum of Art

Exhibitions in the Teusaquillo neighborhood and surroundings, including projects in the Botanical Garden, during the Month of the Art 2014 in Bogotá.